People's Tribune (Tribuna Popular) is an almost legendary newspaper in lusophone sector, famous for its dense and hard-line editorials and critiques. From 2000 to 2009, the Tribune was present in every polemical issue concerning lusophone micronations and micronationalism.

Founded in 1999 as an online board by the initial publisher left-winger Daniel Vaz, in Réunion, its first mail-style edition was publicized in february 2000. However, some months later, just before the 8th edition, the at-the-time réunion Bruno Cava became new puslisher, switching radically editorial line. With new directions, the Tribune started a direct approach to political and social aspects of micronationry, developing a strongly opionionated style, which converged journalism to literature-like dramas, specially while covering scandals, conflicts and polemical subjects.

In april 2001 (41th edition), following the publisher, it was shifted to the Free Community of Pasargada. At least until mid-2006, People's Tribune was generally recognized as the most readed and influential media vehicle within lusophone sector.

Nowadays, with a new technical publisher, Renan Halphen, the Tribune is preparing a transference to wordpress and twitter interfaces.

Together with Aruaque Prize, the People's Tribune Trophy is the most known and relevant award sistematically granted in lusophone sector. Created as part of celebrations for 100th published edition, it was conceded from 2003 to 2005, praising bold accomplishments in several categories the year before (2002 to 2004). 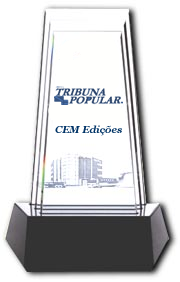