The Democratic Republic of Starland was a secessionist micronation that was located and based in Northern California.

Starland name was relatively picked at random. A list of names included Sonora, NorCal, and others. Finally Hart settled on the name of Starland.

Starland for most of its existence was relatively based upon friends and family who were, for the most part, not really involved with the country at all. Starland was ruled as a Kingdom until from August 28, 2009 – September 10, 2010 before being turned into a Republic, then an empire and then a republic again. It is a de facto democratic republic but ultimately has been ruled as a benevolent dictatorship with democratic principles.

For 13,000 to 15,000 years, Native American Tribes inhabited the areas of what is now the Western United States. It wasn't until the 1500s that Spanish conquerors laid claim to the lands of what is now modern-day California and the American southwest. In 1602, Spanish explorer, Sebastián Vizcaíno mapped the region as New Spain. From 1769-1821, California was ruled by the Spanish Empire, followed by the Mexican War for Independence which saw California under a brief period under Mexican rule (1821-1846). In 1846, citizens and new settlers in the area revolted against Mexico in what became known as the Bear Flag Revolt. California declared independence from Mexico on June 14, 1846, setting up its capital in Sonoma. The California Republic lasted for less than a month before being occupied by American forces. After a few battles in the Mexican-American War, the United States officially siezed California in 1848, along with the entire southwest. In 1849-1850, eastern and European settlers began swarming to California with the discovery of gold. It would be granted statehood in 1850 and for the next one hundred and fifty years, it continued to grow and thrive with the building and continuous expansion of cities such as Los Angeles, San Diego, Sacramento, and the San Francisco Bay Area. In 2008, within the East Bay, a interest in micronationalism began to grow. Finally, on August 28, 2009, what became the Starlander nation declared its soveriegnty and independence from California and from the United States.

In March and April 2011, the Republic and, later, Empire got involved in the conflict in Emerald Isle. Starland fought a political war alongside its ally until its conclusion on April 9. With a new government and new leaders, Starland soon found itself falling into small periods of inactivity and internal squabbles. In early May, a rebel group overthrew the government and ran it for two days before before being defeated. The government soon collapsed again and the population suffered another drop. The government entered a transitional phase for a two week period in May as it voted to continue the nation, reform its government, and vote for a new leader. On May 21, the Second Empire was declared and a new government was sworn in. The Imperial Assembly that had existed for the last few months had been abolished in favor of, once again, a unicameral legislature (Imperial Parliament). The new government abolished the office of President and established full executive power with the Prime Minister and full legislative power with the Parliament while the monarch held no official power.

On March 31, 2012, Nik Hart sent an email to many micronational leaders that he had effectively been the sole active citizen of Starland, and that most of the country's alleged citizens never existed. Hart apologized for his long-running hoax, and expressed a desire to remain in the MicroWiki community nonetheless.

Starland is a democratic republic governed by a constitution which outlines the basic laws and guidelines. The head of the government is the Prime Minister who is responsible for the nation's defense, security, and Armed Forces and acts as commander-in-chief. The citizens of Starland have the power to vote for their leaders and laws and to run for office. To vote, they must achieve the age of sixteen and to run for office they must be seventeen.

Starland has an open-door policy recognizing several other micronations and has been active in establishing friendly relations with fellow micronationalists.

It has a strong anti-dictatorship sentiment opposing governments like China and North Korea and even was involved in a so-called "war" on the military junta in Niger. The nation has developed a strong pro-peace sentiment and operates under their "Why fight when we can negotiate?" campaign. Starland recently has ended its conflicts and avoids others by working through crises or remaining neutral. It is a member nation in Vanguard Powers, Free States Union, AMU, and NAMCO.

Heroes of the State

Enemies of the state

Starland was a member of the United Micronations (UMN), a defunct, Youtube based organization quite similar to the United Nations. It was also a member of the Hazad Union before its merge with the, now-defunct World Micronational Alliance to which Starland agreed to remain. It is also a member of the Vanguard Powers (VP), NAMCO, AMU, and the Free States Union. It once was a member and leading nation of the Micronational and International Committee for Peace and Democracy (MICPD), a now-defunct organization dedicated to working to end wars and help nations tranistion to democracy.

Despite its mainly liberal politics, Starland has zero tolerance for fascism, militarism, and extremism. It opposes governments and organizations which are neo-nazi, racist, sexist, discrimainatory, prejudice, militant, etc. Starland does not recognize some macronations, including the Chinese, North Korean, and Iranian governments, among others. It does not appove of military governments such as Burma and Libya. It does not support Russian backed nations such as South Ossentia and Abkhazia and does not support the micronation of Mustachistan. It does, however, declare that Taiwan, Tibet, Hong Kong and Macau are independent from China.

Recently Starland became controversial in the Micronational World in August 2010, for its former leader's annexation of Aspinburgh . Two nations placed diplomatic embargoes on Starland, and the OAM condemned them in a resolution. Many nations placed embargoes on Starland, including Penrith, MGPRA1 and Secundomia. Secundomia has since removed the embargo. 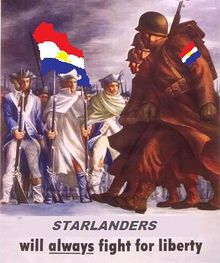 Starland is defended by the Starlander Republican Guard or SRG. The SRG is a peacekeeping force trained in ground, naval, and special operations. SRG is run by the Ministry of War and the Armed Forces which is led by the Prime Minister.

Starland claims residence in Northern California with other claims territory in Antarctica and claims rule over southern half of Pluto, a claim on some land in North Carolina and Alaska.

Starland's climate varies from province to province. In the California provinces, typical winters are wet and mild while summers are hot and dry with temperatures ranging from the low 80s to 110 degrees.

Starland maintains many traditional American customs. Traditional sports include American football, baseball, and basketball, although the country does not have any official teams of their own. Education is provided by the United States education system. While English is the official and most commonly spoken language throughout the nation, Spanish is spoken as well.

There is no official state religion in Starland as defined by the Bill of Rights in the Starlander Constitution. Instead, all religions are tolerated. The majority of Starlanders are either Christians, Agnostic, or non-religious.

God Bless Starland (to tune of God Bless America)Starland National Anthem
Lyrics:
God bless Starland
Land that I love.
Stand beside us and guide us
Through the night with the light from above.

(to tune of America's Hail to the Chief)


Yours is the aim to make this grand country grander,
This you will do, that's our strong, firm belief.
Hail to the one we selected as commander,
Hail to the PM! Hail to the Chief!