From MicroWiki, the free micronational encyclopædia
(Redirected from Educational Republic of Rukora)
Jump to navigation Jump to search

Federal Republic of Rukora (Rukoran: Fende'i Republik de Rukora) was a micronation located primarily in the South East of England. Founded on 22 September 2009 in a small area, the nation eventually grew to encompass about 1/5 of England, but later declined again due to inactivity. It was revived as an independent country by Tom Turner with Ciprian C. as the President, on February, 2012. However, the nation was soon reformed into a direct democracy, which it remained from about May 2012 until the nation's end on 22 September 2013, 4 years of its founding.

Before Rukora, there were many traces of Micronationalism around Rukoran territory. The three biggest were Zanglatovia, The Albion and Topola. Zanglatovia was thought to be founded in 2005 but never became successful. The population never broke 10. It broke up after about a fortnight after lack of interest. The second trace is the Albion which first existed from 2003-2004 and then from 2005-2006. The Albion was the name of two mickey-taking historical anomalies. The original was based on Medieval reanactment and the second on 19th century Texas. This was never even called a nation but contained micronation like elements. The third was Topola. This was a Micronation and the true ancestor of Rukora. It was always a very basic micronation which based itself upon other nations. No relations were ever formed but the homeland itself became successful. This dissolved after the government decided that it wasn't good to share names with a region of Serbia. Topola existed from 1 June 2009 - 5 August 2009. Just over a month later, Rukora was declared independent by Tom Turner.

After the nations original conception of the 22nd September 2009, things started off quietly within the nation. No contact was actually made with other micronations until early October, when a Youtube account was registered and relations began. The first nation to engage with formal relations with Rukora was Danesland. The only real drama of the year was when the bid to host the 2013 MFA World Cup almost came to a premature end after a potential breach in rules of the bidding process. However, excemption was given as there was an apparant unawareness of the rules.

The start of 2010 was mostly known in two lights. Firstly, there was a wave of bad weather which saw disruption to certain services and there was the the establishment of the MUSC on 7 March by Tom Turner. This however, was overshadowed by the outbreak of the Austenasian Civil War. It is widely thought that had the civil war not broken out, the organisation would've thrived. Plans also begun around this point for expansions to the nations territory, which would eventually lead to Rukora much more territory than it could've controlled.

The first real turning point in Rukora during this period was the arrival of James Awaye Jones into the country. Rukora was soon able to be classified as a 5th World Nation under the Boodlesmythe-Tallinni system due to his ability to sell the nation to others. Not long after this saw the claimed Rukoran territory reach its greatest expanse, when it claimed 12 of Englands counties.

During the early James Awaye Jones period, foreign affairs took a short break, but this changed when Rukora joined the OAM in May. From here, foreign affairs thrived, as did internal affairs, with passports, currency and a talented football team all became realities. However, Rukora was still called a principality at this point, and Turner wanted to change this.

Therefore, Rukora was refounded as a Federal Republic and as a partisan state, with the foundation of the Liberal Party. Soon, meetings were being held and the population reached its peak of 94, of which it hasn't topped, even to date.

By the one year anniversary, Rukora appeared to be going well, but a few days later, it turned out things had been going too well. On September 25, pressures to bring the Rukoran football team from Nigeria to England saw Turner break down and he was forced to take a weeklong break as a result. After the break though, things got better for him and the nation. Turner became OAM Secretary General on 7 November after being elected a few days before. This saw Rukora gain respect from MicroWiki community at large.

2011 was a tale of two halves for Rukora. The respect gained in the community from late 2010 fell over into 2011, with the nation finishing 4th in the 2nd OAM Influence Survey, then seen as a major deal. At the same time, Turner was able to organise meetings amongst established members of the community (such as James von Puchow, Alexander Reinhardt, Pierre d'Égtavie and King Quentin I) to exercise what was then perceived to be some variety of power.

By the end of January, however, the internal politics of Rukora began to lose stability. Where as Rukora had previously seen a stable one party state, 11 February saw the dissolution of the Liberal Party into the Libsozil Party (Left Wing, Simulationist) and the Independence State (Centrist, Secessionist). Not long after this, the Rukoran Capitalist Party is founded by Nicholas Woode-Smith, a leading Libertarian within the MicroWiki community. Whilst this may all have looked fairly divisive, the period also saw the annexation of the Territory of Mercury as Semi-Independent, electing a member to the Rukoran Parliament whilst retaining its own legislature. The territory of Mercury was headed by Joe Foxon.

In the early days of March, an election took place, the first one in the history of Rukora. The election saw an astounding win for Libsozil, with the Capitalists and the Independence State also gaining seats. The nominated members then took their seats on the 2nd April, swiftly followed by great changes to the country. Although the Second Information Crash saw a temporary disablement of government functions, the Reform for a New Rukora established a completely new setup for a state. Whilst the previous state had a secessionist (perahps even slightly immature) target, the new Ejuka'i Republik be Rukora (Educational Republic of Rukora) was primarily aimed on simulating the nation state. These reforms coincided with Tom Turner stepping down a Secretary General of the Organisation of Active Micronations, and the issues linked to his decision to depart from that position are likely similar to those that shaped his upcoming actions. On June 12, he announced that he would not seek any political position within the Educational Republic, and soon he attained citizenship of the Zonian Confederacy. Rukora was subsequently overtaken by Joe Foxon (the transition of power taking place on 1 July) as Toßades'r (Prime Minister, though he was effectively the President as well). Some of Turner's changes were reversed during this time, such as the TPES economic model, but the simulationist approach remained.

On the 19th August, due to an ongoing period of inactivity, Rukora temporarily lost its independence to the Zonian Confederacy, volunteering to become a Confederate State in the interest of both countries. Although Rukora remained quiet for a while, it soon merged with the Zonian State of 'The Weald', fully integrating itself into the Confederacy, but with Ciprian of Jucaresti playing a much greater role.

For the beggining of 2012, Rukora was a part of the Zonian Confederacy due to the inactivity that occured previously. However, on February 18, Rukora was revived as a Federal Republic with Ciprian C. as president. However, later on in the year, this power was removed in favour of a collective head of state made up of all members of the Resir de Populis. The rest of the year remained a quiet one for Rukora, with the excpetion of Tom Turner's presence at both PoliNation 2012 and the GUM's 24 Hour Quorum. Towards the end of the year, Rukora featured mildly in the GUM Diplomatic Incident that eventually saw the end of Yaroslav Mar's term as chair when it withdrew from the Security Council. Subsequently, Tom Turner was appointed as acting Vice-Chair of the GUM until new elections were able to take place.

Early 2013 saw the approval of the 11 States of the Federal Republic, with Keycod being approved as the capital. Later on in the year, the Rukoran Sports and Social Collective was founded in order for the nation to rejoin the MFA. Between 15 and 20 July, Tom Turner participated in the 2013 Intermicronational Summit on behalf of Rukora. However, after a continuous string of inactivity, under-function and general lack of ambition and resources, Rukora was disestablished on 22 September 2013 at 22:00 GMT, exactly 4 years after it was founded.

A sketch-up of the interior of the Resir de Populis.

Rukora was a direct democratic federal republic. It had a collective Head of State made up of members of the Resir de Populis (English: House of People/House of Citizens). The Resir de Populis was made up of all the citizens of Rukora and it is here that decisions were made and resolutions were passed. Before the given setup, Rukora had experimented with representative democracy, although Rukora was founded on this basis of 'ERD', an oversimplified and more hierarchical variety of direct democracy. 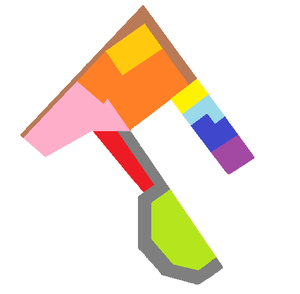 A map of Rukora, with all 11 states colour coded.

Rukora was made up of a total of 11 states, including the state where the capital is based, Keycod. Alphabetically, the states, in order, are the following:

Rukora was a member of the GUM at the end of its life and a member of the OAM earlier during its life.. Due to a motion passed on the 3rd June 2012, Rukora only held formal relations with nations of whom they were formed with after the revival on February 18, 2012, all of which remained in place until the very end.. The following nations signed treaties with Rukora, which remained active until the disestablishment of the state: