The YouTube Crisis is a name used to describe the treason trials and accusations beginning 12 October 2009 of former A1 citizen and member of the A1 National Liberation Front, Nathan Holden, mainly for committing High Treason against A1.

The accusations began on October 12 by Sean D. Wright in an article posted on the A1 News Service ( http://a1ns.wordpress.com/2009/10/12/chairman-denounces-capitalist-traitor), accusing the unnamed citizen of "High Treason" and "vandalism of A1 Government Property".

It is understood that the offences occurred on the popular website, 'YouTube', which involved the former citizen, Nathan Holden, committing acts of treason which were later detailed at the High Court trial.

Involvement of A1 Civil Security Service

Although it was the A1 Ministry of Communications who disclosed the information to the Office of the Chairman, Sir. Hogg handed the investigation to the A1 Federal Police, under the authority of the A1 Civil Security Service.

At the lack of active chief, Sir. Hogg appointed David Massarde to head the A1CSS and hence, the investigation.

The investigation concentrated on the two main pieces of evidence: the one star ratings on YouTube and an A1 National Liberation Front email.

The email sent by the A1NLF included the quote: "We have powerful friends who could do you untold harm, as we have already shown you just a taste of what we are capable of" (emphasis is ours). This was linked to the actions of Nathan Holden on YouTube but is not proper evidence.

Involvement of A1 High Court

The Chairman, in same article, promised A1's citizens that the "traitor will be brought to justice".

Sir. Hogg later advised the Lord High Justice of A1, Maximus Ze Blah, that A1's second ever High Court case would be held in approximately four weeks from October 14, 2009.

Following the drafting of the report into the crisis by the Office of the Chairman and the A1CSS, it came to light that the A1 National Liberation Front, a registered terrorist organisation in A1, was accused of being involved in the acts of treason.

It is also alleged that the citizen who committed to original offences may have been acting under orders from Colonel Moller, the commander of the A1NLF. 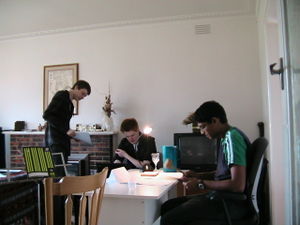 The A1 High Court in session during the Trial.

On December 8, 2009, the A1 High Court held its second-ever session to hear the case against the alleged perpetrator, Nathan Holden.

The Court heard that the defendant, Nathan Holden, rated videos on the A1BC YouTube account the lowest possible rating (one star) as well as doing the same on the Chairman's personal YouTube account, as well as indecent exposure in public.

At the conclusion of the trial, the jury found the defendant guilty on all charges, and was sentenced by Justice Ze Blah to cancellation of Mr. Holden's citizenship, exile from A1 and banishment from all A1 territory. This was contrary to previous rumours of the death sentence being proposed by the prosecution.

A video recording of the trial is due to be posted on the A1 Broadcasting Commission's YouTube account once editing is completed by the Ministry of Communications & the A1BC.