From MicroWiki, the micronational encyclopædia
(Redirected from Slitronia)
Jump to navigation Jump to search

Slitronia (Pronounced: /slitrəʊəniɑː/) (Estonian: Slitroonia, Estonian pronunciation: [slitroːniɑ]), officially the Great Kingdom of Slitronia (Estonian: Slitroonia Suurkuningriik), is a self-declared sovereign state, commonly known as a micronation to external observers. It is located in Northern Europe and is enclaved by the macronation of Estonia. The territory of Slitronia consists of the mainland and 3 islands on the eastern coast of the Baltic Sea, which have been divided into 3 counties and 1 territory, covering a total area of 0.16 km² (0.062 square miles). Slitronia's capital Parva Navale, and the County of Kalamaja are the largest cities and urban areas in the country. Slitronia declared its independence on April 11, 2020. The official languages spoken are Estonian and English.

Before Slitronian declaration of independence, there was a contest to decide on the flag and the name for the nation. The name Slitronia came from the combination of the two highest voted names, being Slijoodu and Trumba.[1] 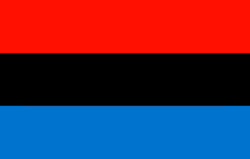 Khuulide Khuttide Khlubi (literal translation: Cool Guys Club) or sometimes shortened KKK[note 1] was a small school group that existed in the year 2019. It consisted of 4 people, one of which was Johannes, the current Great King of Slitronia. KKK wasn't a micronation, because at the time Johannes or anyone else in the group had no idea what micronationalism was.

The idea of Slitronia as a micronation came in early 2020 when The Great King Johannes I found the micronational community. Slitronia declared its independence on the 11th of April, 2020.

Up until April 2022, Slitronia was in a state of direct monarchy (meaning the Great King controlled the country directly). This is due to the Imperium not being elected yet. The Great King stated, that he will give up his direct control after the Imperium has been elected.

In the beginning of April 2022 an the first Imperium election was held. This marked the end of the direct monarchy era, as the contrll of the country passed onto the Imperium.

Slitronia has a total area equal to 0.16 km² (0.062 sq mi). It borders Estonia on all of its sides, making it enclaved. The only exception to this, are the Kasari Islands, which are surrounded by the Baltic Sea. Slitronia is located mostly between 59.5° and 59° N and 22.4° and 26.1° E. Slitronia has 3 islands. Slitronia has no lakes or rivers. The most common tree species are Pine and Apple trees.

Slitronia is situated in the northern part of the temperate climate zone and in the transition zone between maritime and continental climate. Slitronia has four seasons of near-equal length. Temperature ranges from 17.5 °C (63.5 °F) July, the warmest month, to -3 °C (27 °F) in February, the coldest month.

This is a table classifying Slitronia by different systems.

Slitronia has recognized currently 8 micronations and has an alliance with 1 micronation. Slitronia is a member in the Nordic Assembly, Baltic Union and Alliance of the Micronations, an observer in GUM and was in the World Micronation Organization which it left due to the organization being inactive.

The Slitronian Defence Forces is the main military force of Slitronia.

The following table lists the National Holidays of Slitronia:

Slitronia plans to take part in the 2022 MOF Games.