From MicroWiki, the free micronational encyclopædia
(Redirected from Revalia)
Jump to navigation Jump to search

Revalia (/rɛvɑːliɑː/), officially the Revalian Kingdom, is a sovereign state located in the Harju region of Estonia. The territory of Revalia consists of one island and pieces of mainland enclaved by Estonia, covering a territory of 0,36 km². Capital and largest city of Revalia is Trumpetburgh, which has a population of 19. Revalia was declared independent 19 September 2020. Revalia is an executive constitutional monarchy, ruled by King Sander II as the head of state. The official languages spoken are Estonian and English. Revalia claims to be the successor of the Estonian ancient county, Revalia (or Rävalia) which in Estonian is Revala (or Rävala).

After Revalia was declared independent, Sander Koff was elected the Prime Minister. He also served as the Head of State, in the title of regent. During Sander Koff's Regency, Revalia made big diplomatic developments; signed treaties with many prestigious nations. Proper government institutions were established. On the 14th of March, the Constitution is passed in the Parliament and goes into effect.

On 27 April, Sander Koff declared himself the King Sander II of Revalia with the total support of Parliament, Cabinet and the Royal Privy Council.

On 27 April, when Sander Koff had just ascended the Throne, His Royal Highness, Prince Indrek, started a short rebellion, stating that Sander II's ascension was unlawful. Prince Indrek gathered a small unarmed force to take over the Royal Palace, but the Trumpetburgh garrison and the 1st Infantry Division, under the command of Colonel Minni Koff of Reemle, managed to defeat the prince's forces. Prince Indrek then apologised and Sander II accepted his apology. No court trial was ever held.

On 25 February 2022, during an extraordinary meeting of the cabinet, an unknown communist terrorist attempted to assassinate King Sander II with a lethal weapon. The attempt failed, because the terrorist was quickly disarmed and later executed by the Police and Border Guard Services.

His Majesty's Royal Revalian Government is formed by the strongest party (or coalition) in the Revalian Royal Parliament. The current government-coalition is between Revalian Monarchist Party "Literator" and Revalian Socialist Workers Party. There are various government ministries. The current Prime Minister is Prince Paul.

Revalia is located in northern Estonia, Harju region. Revalia claims small amounts of land in various places, most of the claims are in the city of Tallinn and the Käsmu Peninsula. All of these claims make an overall 0,36 square kilometers.

De Jure Currency in the Revalian Kingdom is Revalian Livre, although de facto, euro is used. 1 Revalian Livre is worth around 2 euros. Livres are usually coins, although 10 Livres is on paper.

Revalian culture is strongly nordic, though it includes more southern traditions like Football.

Football Federation of the Revalian Kingdom

Revalia has a strong literature culture, as some of the Royal Family are writers themselves. The newest book Revalian Union of Writers (Under the leadership of His Royal Highness, Duke Indrek Koff) published was written by Her Royal Highness, Duchess Eva Koff and it was named "Bright Sleep" ("Kirgas Uni" in estonian).

Revalian Cuisine is very special; food from all around the world is commonly eaten, although there are some very traditional nordic recipes that the Revalian Royal Cooking Association manages, under the leadership of Her Royal Highness, Grand Duchess Mai Rõuk. One of them, the most famous one is the minced meat sauce, "Hakklihakaste" or "Hakklihasoust" in Estonian. 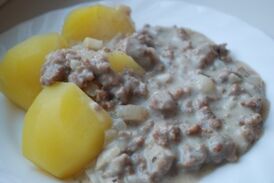 Theater in Revalia is perhaps the most famous part of culture in Revalia. 3 of the Royal Family (HRH The Duke and Duchess of Tallinn, HRH The Earl of Käsmu) are professional actors, have acted in many pieces and movies. The Royal Revalian Theater Association under the leadership of Her Royal Highness, Duchess Maria Koff is in capable of managing the Royal Revalian Theater.

Revalian Evangelistic Lutheran Church is led by the Archbishop of Trumpetburgh. The current Archbishop is Archbishop Clemens the Hospitaller.

Revalian folklore is widely known around the kingdom. The most notable piece of folklore is perhaps about the Lake Ülemiste's Old Man. The legend says that the "Old Man of Lake Ülemiste" (Estonian: Ülemiste vanake) lives in the lake. When anyone meets him, he always asks: "Is Tallinn ready yet?". If the other person answers "Yes, the city is ready.", then the old man will send the lake waters out to cover the city of Tallinn. In this way, if anyone meets this old man, they should answer: "No, the city is not ready. There is a lot of work to do still." In this way the city can be saved.

Awards and titles of Revalia

The nobility and royalty of Revalia consists of 10 ranks:

The honorary titles of Revalia are those given out in honour of those who cannot serve Revalia physically, but are awarded the titles in symbolism.

Revalia has signed treaties of mutual recognition with several nations.