From MicroWiki, the free micronational encyclopædia
(Redirected from National Centre of Computing (Sirocco))
Jump to navigation Jump to search

The National Centre of Computing (NCC) (formerly known as the National Institute of Computing) is a museum established in Gate Park, Alston, NCD, Sirocco on 6 August 2011. The Centre specialises in documenting legacy operating systems and software by running them on virtual machines using the VMware Workstation program and the hosting of old images thought to have been lost.

The Centre is split into three main parts; the National Centre of Computing proper in Alston, where the majority of machines are operated; the NCC Image Repository, which hosts old (primarily technology-related) pictures thought to have been lost; and the Technical Repair Centre in Havilland, Wellesley, where several functioning and non-functioning legacy machines are housed, and when necessary, sent in for maintenance. The Technical Repair Centre also serves as a museum of obsolete hardware in various conditions.

Each guest machine is left close to its original state, with some light customisation in some systems (notably the Windows 3.1, 98 and 2000 machines) and some additional software released at the same time as or close to the system's release (such as Microsoft Office 95 for the Windows 95 machine and Microsoft Plus! 98 for the Windows 98 machine). 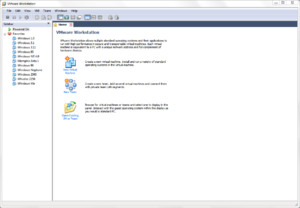 The majority of the Centre's virtual systems are run on VMware Workstation, the exception being the Windows XP machine which runs on Windows Virtual PC.

The museum opened on 6 August 2011 with two operating systems (Windows 95 and Windows XP), and since that time has grown to include an extra six major Microsoft Windows operating systems as well as one copy of MS-DOS, copies of unreleased Windows betas, as well as a large array of classic computer programs from the mid- to late-1990s and early 2000s, including Microsoft Office 4, 95, 97 and 2000, Windows Media Player 6.4, 7 and 8, Adobe Photoshop 3.0 and Internet Explorer 1, 5, 5.5 and 6. At current the Centre has virtual machines of nearly every Windows operating system released between 1992 and 2001, as well as a large collection of unreleased (beta) editions, which as of October 2013 are divided into ten exhibitions in Alston and Rathlyn (MS-DOS 6/Windows 3.1/Windows for Workgroups 3.11, Windows 95, Windows NT 4.0, Windows Memphis, Windows 98, Windows Neptune, Windows 2000, Windows Whistler, Windows Me and Windows XP) and two in Havilland (Windows 98; Windows Me).

The museum has its roots in 2006 when future Siroccan Premier Daniel Anderson and a friend started a movement to prevent Windows 98 (and by looser extension, Windows Me) from having its support ended.[1][2] By the end of the year the movement had grown to encompass Windows 3.x, 95, NT 4.0, 2000 and XP, although XP would later be dropped. The movement was also boosted by the acquisition of a Windows Me computer (see below) on 9 December 2006, which among other things successfully ran copies of Microsoft Works 2000 and Microsoft Word 97.

The following year, a new Windows Vista computer was acquired. Microsoft Virtual PC 2007 was then installed and a copy of Windows 98 successfully started. However, in April 2008 the host machine suffered a complete failure and was soon replaced. A short time after this, Windows 98 was again installed and started, however a major error a few months later meant a complete re-do was necessary. MS-DOS 6 and Windows 3.1 were also started to limited degrees of success.

31 December 2009 saw the host computer upgraded from Windows Vista to Windows 7, and a few months after this Windows Virtual PC was downloaded complete with a fully-working copy of Windows XP Service Pack 3, however, the usual installation of Windows 98 was found to be incompatible and future endeavours were abandoned.

August 2011, however, saw a renewed interest in virtual machines when a copy of VMware Workstation was acquired. A copy of Windows 95 was found and installed on August 6, and over the coming days, further machines were added. The Centre's main goal of documenting a DOS and Windows system was achieved on 30 September 2011 when a fully-working copy of MS-DOS 6 and Windows 3.1 was acquired and installed.[3] Despite some initial issues such as DOS refusing to install and an inability to load Microsoft Word 5.5, this final addition completed the Centre's objectives.

Following the change of the government's primary computer in April 2012,[4] the Centre's operating systems were progressively moved from an external hard drive back up to the main computer. This allowed for faster machine responses and the ability to utilise a 1920x1080 resolution (see below). Testing a few weeks later with the Windows 8 Release Candidate (RC) saw the upgrading of VMware Workstation from version 7.1 to 8, but while this allowed for Windows 8 RC to run, it stopped any other machine from being started. Downgrading back to version 7.1 rendered the Windows 8 RC unusable but allowed the older machines to work again after some repair work.

On 27 July 2012 the Centre's Technical Repair Centre shifted from its old headquarters in Brookfield to its new premises in Havilland. On 5 August 2012, one day shy of the Centre's one-year anniversary, the Institute of Scientific Research was opened,[5] utilising some of the Centre's computing power. On the same day, the Centre unveiled its Image Repository, dedicated to the preservation of rare images chiefly relating to computing.[5]

The Centre confirmed on 20 October 2013 that it would be expanding its collection and dividing it amongst four exhibitions - Classic Machines (virtual machines and period computers), Software Repository (software and images), Hardware Store (computer hardware and peripherals), and the NCC Library (books).[7] It also unveiled its new logo, first presented in the Sirocco Times the following morning.[7]

Virtual machine centre with eleven guest systems running off two Windows 7 host computers. All editions listed below are present on the main computer, while a more limited selection of Windows 3.1, 95, 98 and Me is present on the secondary computer.

Maintenance centre with two late-Windows 9x systems running off their original towers. Because of this both machines are referred to as "Tower" machines. The Technical Repair Centre also houses, alongside the two "Tower" machines, five other computer towers in various states of repair and running various operating systems.

The Centre's curator Daniel Anderson has noted that the Centre would be interested in acquiring other Microsoft-built systems including DOS 5, Windows 3.0 and Windows NT 3.x as well as other systems such as IBM's OS/2.[3]