From MicroWiki, the free micronational encyclopædia
(Redirected from King Wilary I)
Jump to navigation Jump to search 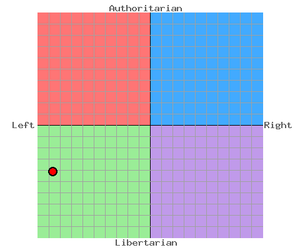 James Wilary first entered into politics in Novmeber, 2008 after the United States election of that year. He subsequently founded the Royal reformed States of America in May of the next year as the beginning point for politics. Wilary then continued to be the head of state for the nation for thirteen months afterwards.

When the RrSA joined the Organisation of Active Micronations in February of 2010, he began the international sphere of his career. He led the RrSA and then, once he reformed as a Socialist after finding intrest in the ideology, the People's reformed States Republic. The PrSR was headed by Wilary until it merged with the Federated Republics of A1 in November 2010, almost exactly two years to the day of his beginnings in politics.

During his career in the Organisation of Active Micronations, Wilary servered in a number of positions, and was the delegate to the organization from the RrSA and the PrSR. Before its disestablishment, he servered as Chairman of the Organisation of Active Micronations Activity Testing Committee, and was later the Activity Enforcer for the OAM. He also held the positions of Vice Secretary General of the organization, Judge of the Intermicronational Court of Law, and Secretary of the OAM Meteorological Office.

Wilary, as a citizen of the Federated Republics of A1, was placed in positions of less international authority and ran mainly internal bodies. The A1 Defence Force was led by him as the General Officer Commanding. He was also the leader of the Socialist Party of A1 and a major leftist contender in A1. The Prsänëa People's Republic in the federated republics was led by Wilary as the continuation of the RrSA and the PrSR, and he also held the Chamber of Electorates seat for the region. In December 2011, he was elected as the head of state of A1, to the position of First Secretary. He held that position until June 2012, and resigned admist a planned government reformation by Mars McTavish.

His Royal Highness the Grand Duke Wilary the First of Prsänëa, Archduke of Georgetown, Duke of Lincoln, Governor of the Crown Territories, Viceroy of Willand, Marquess of Stormont, the Baron of.

Arms of Wilary as the Marquess of Stormont