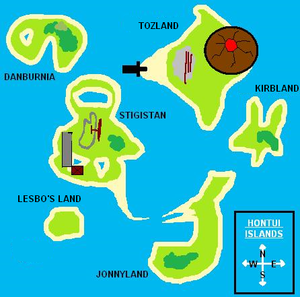 The Hontui Sector was a British sector of micronations based around a fictional archipelago called the Hontui Islands, located in the north of the Pacific Ocean. Active between 2008 to c. 2010, the sector is best known for its large influence over the MicroWiki community during late 2008, during which members of the sector exhibited their influence by pioneering large developments and changes in the community that would later come to be known as the "pillars towards the foundation of the modern community", which seemingly occurred in 2009. Micronationalists of the sector were all "real life" friends with each other and, although based around a fictional archipelago, several physical events and activities between members of the sector took place, with sporting events like the Hontui Premier League being an important focus of the sector.

The Hontui Islands is a fictional archipelago located in the north of the Pacific Ocean, consisting of six islands: Danburnia to the north west, a medium-sized island; Tozland (formerly the Land of Toz Boz), a large island to the centre-east, which has a dock; Stigistan, a large island in the centre with visible buildings; Kirbland, a small island, to the far east; Lesbo's Land, the smallest island of the archipelago, near the south-west, and lastly; Jonnyland to the south-east, a large island. Each island corresponds to a titular micronation. Most of the islands consist of grasslands and hills. Trees are known to exist on some of these islands. It may also be likely to presume that the yellow surrounding the ocean and lakes might be sand. Two of the islands have lakes: Stigistan has three – two in the south and one in the north – and Danburnia has one. Furthermore, Tozland has an active volcano, named Mount ASHS.

Micronations that were officially apart of the Hontui Islands: