The Zealandian Transport Agency (ZTA) is a Zealandian Government entity tasked with promoting safe and functional transport by land, sea and air, including the responsibility for driver and vehicle licensing and investigating rail accidents in Zealandia. 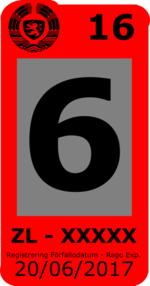 In this case from Tiranaien

The Control Mark (Zealandian: Kontrollmarke Swedish:Kontrollmärke) is issued to all vehicles registered in Zealandia and denotes that it is currently registered and the month in-which it was registered.
All Control marks are valid for 12 months from the date of issue.

All vehicles registered in Zealandia must show a Licence Plate (often called a number plate), These in Zealandia usually stay with a vehicle and are exchanged when it is transferred to another area of registration.
Codes usually follow the dialling code of the region then town or city followed by a unique identifying number, all Zealandian number plates are black with white writing and start with the letters ZL. .

Number Plates in the Kingdom of Zealandia