Aysellant comes from the national word for Ąysel – "Far" and lant which means "land", the combination of the two words means "far land ".

Considered to be the founding date of January 27, 2011, when it was proclaimed the Declaration of State Sovereignty. However, this declaration was only a consequence of its announcement. Previously been written a Manifesto on the recognition and approval of the rights. Within a short time studying the experience of earlier micronations. At the same time, the chosen followers. One of the first and rendered invaluable assistance in the proclamation of the Declaration of Sovereignty, became Baron Heinrich (Henri) d'Aurgie. There were others who supported the government in the initial stage, and then, unfortunately, gone down in history ... The purpose of nation-building was elected an ideal modeling of the state system. ... During the first months of the State Council, acting as the supreme legislative authority of the country, adopted the Constitution, other laws and regulations. Along with the work of the State Council began the formation of the supreme agency of the executive - the Cabinet of the Government. Temporary charge of the Minister of State of the country was entrusted to Her Highness Princess of Aysellant. ... April 15, 2011 event has come to pass, which is desirable for any new state - the birth of the first naturalized citizen, that is a citizen who has both parents full citizens of this country. The increment of naturalized citizens of the Princedom started with a personal example of the Ruling House. Manifesto of His Serene Highness, of 15.04.2011 for a Princess Natalya bestowed a personal title of Countess of Negotin. The influx of citizens by the middle of 2011 has dried up. Many of the previously accepted citizenship ceased to be active, which has a negative impact on the common sentiment. However, during this first year of existence of the Princedom, has been greatly expanded the legislative base. In the same period, was developed concept of Military Doctrine and Foreign Policy Doctrine. Also were developed and approved samples of the basic documents of identification. From scratch designed and launched the official website of the Princedom. During the first year of the sovereignty Princedom has made of a modest international recognition. Established diplomatic relations and signed agreements on mutual recognition and friendship with the Principality of Valldemosa, a Single Union, the Kingdom of the White Lands, Baltic Principality. The Princedom of Aysellant acted as one of the founding members of the League of Russophone micronations, and also took part in the online summit of micronations "Inter-Micro", held in November 2011 in the Republic of Lostisland, as an observer. Overall, the year was a tense and, given the acute understaffed and low activity citizens in general can be to recognize it's hard. The second year of sovereignty was no less intense. Since the beginning of 2012 among citizens appeared the people whose work of that office in various government positions significantly revitalized formal and informal resources of the Princedom. Legislative activity in the state in 2012 slowed down. This is partly explained by the fact that the basic package of legislation was passed in the first year of sovereignty. However, the activities of the State Council this year, in the absence of legislative initiative, become a matter of censures, and its powers were suspended in June, by the special Manifesto. The main type of legislation in 2012 - Ordinances. In the same year, on the basis of the Ordinance, adopted the Law "On state structure and administration of the State", establishing serious changes in the structure of public authorities, which entered into force on 1 January 2013. Foreign policy of the Princedom also passed without any sudden deviations. However, this year, the Princedom has joined the League of Countries, as an observer. In addition, signed a cooperation agreement with the University of the Principality of Valldemosa. In 2012, diplomatic relations were established with the signing of appropriate agreements the Kingdom of Amandium, Kornburgian Republic, the Flandrensisian Commonwealth. Princedom of Aysellant been registered and received the status of a Micronational Professional Registry. According to records MPR it’s Register number 001554 by classification MNAT. Created an official page on Facebook and a group VKontakte.

Greatly intensified religious and educational activities of the Christian confessions of the Princedom. Initially the religious theme of Christianity was divided into Orthodox and Catholic branches, however, thanks to the will of the citizens, expressed a desire to unification of Churches, it was decided that such a merger. Now the theme of Christianity is united and renamed into the Universal Christian Church. In addition, in 2012, relations were established and supported by His Eminence Metropolitan Archbishop David Leon Cooper, Master of the Order of the Lion of Styria, who agreed to take care of the religious education of the citizens of the Princedom. In the same year were founded official media: the Internet magazine "Almanac of invisible lands" and the Social-Political Bulletin "Aysellant today", going out once a month in PDF.

2012 was also marked by events, not less important, though not so noticeable at first glance. Defined the procedure for licensing and registration of legal entities, changes in military doctrine, the draft customs regulations on the import, were prepared and issued the samples of coins-testons in denominations of 1 Besant. Stepped up their activities foreign diplomats in the Princedom. Heraldic Collegium has developed The Armorial Matricul. Expanded system of awards of the Princedom - to it added several medals. Have been developed heraldic signs of some departments, and also flags, banners, pennants and banners of officials.

The Princedom of Aysellant claims some territory of Antarctica: Queen Maud Land, located at coordinates 19º00'-20º00' W and 84º00-84º03' S , a total area approximately of 50 km2, and based its claim on Cession (Assignment) Agreement between the Principality of Angellica and the Princedom of Aysellant, which signed July 5, 2013, on an interpretation of the Antarctic Treaty (1959). Government of Princedom sent letters to the United Nations, the European Union and to the nations who signed the Antarctic Treaty to inform them of his claim. All of these countries ignored claim. 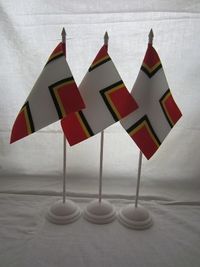 The Princedom of Aysellant open for diplomatic relations with other serious and civilized nations and micronations which correspond its criteria for recognition. External affairs responsibility of the Ministry of foreign policy, which is directly subordinated to the Minister of State. Ministry comprises Department of State Protocol, Department of the Diplomatic Corps, Diplomatic Archive, Department of International Economic Relations.
For today diplomatic relations were established and maintained with the Principality of Valldemosa, Baltic Principality, Kingdom of White Lands, Kingdom of Amandium, Flandrensisian Commonwealth, State of Abyssland, Kingdom of Hope, Leylandiistan, Republic Eslanda, Principality of Angellica (protectorate of Soverein Order of Ahellia), Federal Republic of Lostisland, Byzantine Empire, Republic of Promolands, Aerican Empire, Molossia, Principality d’Aigues-Mortes, Virtual State of Drakonberg, Kingdom of Ruthenia, Kingdom of Harenfall, Empire of Myrotania, DeWaCo Estates, Foster Island Republic, Republic of Gitania, Hispanoturk Republika of Balkonya, Principado de Valumar, The Free Community of Nueva Altaria, Republic of Rino Island, The Royal Republic of Latitudia, World Humanity Commission/WHC/. For various reasons, no longer supported by relationships with the Grunkia, MNOER Empire and the Single Union.

The Princedom of Aysellant is hereditary monarchy with Constitution and especial rights for Monarch. On a daily basis, most executive power is exercised by the Prince and Cabinet of Government, with the Minister of State acting mostly as a go-between who helps to co-ordinate the policies of Cabinet in accordance with the wishes of the Head of State. Legislative power is vested of State Council (Parliament), which is comprised of the Monarch, Minister of State and House of Representatives with chairman. The judiciary is comprised of Supreme Tribunal, General Jurisdiction Courts, Special Jurisdiction Courts, Tribunal of Arbitration and Seigniorial Court.

As a monarch His Serene Highness Prince of Aysellant can grant noble titles:

are not provided but can be confirmed on request.

Law enforcement in the Princedom is the responsibility of the Police. Jurisprudence operates on a legal system of Civil Law. Aysellant has an extremely low crime rate.

According to the last census (2017) the number of citizens is 39 people. Of these 30 active men and 9 women.
One of the citizens recognized the lack of untraceable, and one was stripped of his citizenship in 2012. 6 people were deprived of citizenship by Ordonance in 2015. Two citizens voluntarily renounced their citizenship in 2016.
The main language spoken - Russian.
Religion - Christianity,Paganism, Hinduism.

Russian is the only commonly spoken language in main lands of Aysellant, known and used daily by the entire population. English is generally the additional language. Aysellantean used for government business, although some Latin is rarely used for more ceremonial occasions.

Princedom of Aysellant - a secular state and therefore every citizen has the right to be a believer, and not to profess any religion; to each guaranteed freedom of religion. For this reason, in the Princedom are no state institutions that regulate the relations in this sphere, and coverage and discussion of religious issues highlighted in the individual - is open to visitors and citizens - block and the separated into three themes: the Universal Christian Church, Islam, Rodnoverie.
The first theme - Universal Christian Church - is the youngest and most active: appeared in 2012 through an open, common and equal suffrage and was the result of unification of the Orthodox and Catholic Churches of the Princedom. The Church of the Princedom is out of the structure and hierarchy of the Catholic and Orthodox Churches. This is precisely the reason why the Church of the Princedom is called "Universal Christian Church."
In the Church of the Princedom are two rites: Latin and Byzantine (Eastern), the service can be performed in the temples on each of them in accordance with the liturgical rules. However, there is a trend towards unification - the establishment of the Latin rite. The liturgical calendar of the Church of the Princedom corresponds to what is accepted and approved by the Holy See for the Oriental Churches.
Due to the fact that members of the Church is a big part of the citizens of the Princedom, in their secular activity, this is quite an active part of the population seeks to implement the principles set out in the Social Doctrine of the Catholic Church - a state in which the human person and of course always is the principle the subject and the goal of all social relations.


Islam Due to the fact that the religion is almost not represented within the limits of the Princedom in the profile "branch" of the forum of Aysellant in 2013 to make the hike, having reviewed the citizens and visitors to the principles of the Muslim faith, and is now open theological debate on the topic, the purpose of which can be defined as ecumenism - finding ways dogmatic and canonical conditions that may reconcile Christianity and Islam.


Rodnoverie In fact, this religion and profile forum topic of the Princedom is the concentration of pagan beliefs of ancient Slavs and the peoples who inhabited Eastern Europe. Topic is practically inactive because of the small number of adherents of the religion of the citizens and guests of the Princedom.

in the process of writing