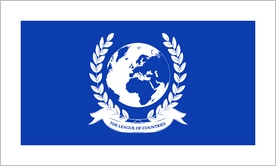 The official flag of the League of Countries

The League of Countries [1] (LOC) is an international organization founded on March 9, 2012 which is open to all micronations (and, technically, macronations as well). Its mission statement, from Article I of its Charter:

The League of Countries is hereby established, for the purposes of fellowship and dialogue amongst the various countries of the world collectively and individually, regardless of population, location, ideology, government, culture, power, or wealth, and for the promotion of their rights and welfare as sovereign entities, as well as for wider peace, understanding, and goodwill for all.[1]

The League was founded as a free public service to the international community by the Commonwealth of Novaltia, from which it is otherwise independent. A country may join in two ways: either as a Member-State, which will allow it to have up to two voting Delegates in the General Assembly, or else it may choose to sign up simply as a non-voting Observer. There is no cost to participate, and there is no vetting process for new members, besides the most basic requirement of being a micronation or larger. The League is currently recruiting nations to join, and the first elections for Secretary-General, Vice Secretary-General, and other officers will be conducted as soon as there is a sufficient number of members. The website is: http://leagueofcountries.novaltia.org The Virtual HQ forum also includes amenities like a free arcade, in addition to a Lobby board for general micronational, macronational, and general discussion.