Madurese Council Republic, officially known as Republik Dewan Oreng Maddhurreh or RSSRM, was the federal entity of Democratic Republic of Sunda Raya. It was established on February 28, 2014 by the Revolutionary Council of Sunda Raya. It was located in Madura Island, in the east of Java Island. It was consisted of 25 communes.

Immidiately after the Great Southeast Asia Proletariats Revolution, the short lived provisional government was dissolved and the Democratic Republic of Sunda Raya was proclaimed by the Revolutionary Council of Sunda Raya in Bandung Raya. This event caused the escalating proletariat movements in several region. As a result, the Council Republic of Madura was proclaimed by the Madurese Workers Congress.

Council Republic of Madura had a population of 8, most of whom are Madurese. The main language of Madura was Madurese, one of the official language of Sunda Raya, which was also spoken in part of eastern Java and on many of the 66 outlying islands. 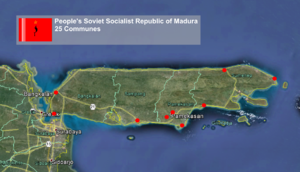 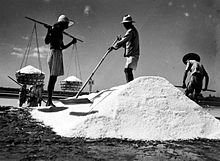 Subsistence agriculture was a mainstay of the economy. Maize was a key subsistence crop, on island's many small landholdings. Cattle-raising was also a part of the agricultural economy, in addition to being the basis for Madura's famous bull-racing competitions. Small-scale fishing is also important to the subsistence economy. The salt making is the major industry of Madura.

The gradual agriculture collectivization was then implemented throughout Madura. During the NEP, the small to medium size private enterprises was allowed under strict supervision.