The republic had a population of 9, which made it the largest federal entity of Sunda raya in terms of population. The main language of the Soviet Socialist Republic of Parahyangan was Sundanese, one of the official and major language of Sunda Raya.

West Java was the native homeland of Sundanese people which forms the largest ethnic group in West Java, followed by Javanese who migrated to the province centuries ago. Since Jakarta and the surrounding area, including West Java, was the business and political center of Sunda Raya, the federal entity had attracted various people from throughout Sunda Raya and its neighbours. 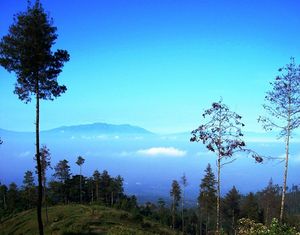 A view from Manglayang towards Komune Bandung Raya.

Soviet Socialist Republic of Parahyangan, as a part of the Pacific Ring of Fire, had many mountains and volcanoes. The vast volcanic mountainous region of inland West Java is traditionally known as Parahyangan (also known as Priangan or Preanger) which means "The abode of hyangs (gods)". It was considered as the heartland of the Sundanese people. The highest point of West Java is the stratovolcano Mount Cereme (3,078 meters).

The gradual agriculture collectivization is now implemented throughout Council Republic of Parahyangan. During the NEP, the small to medium size private enterprises was allowed under strict supervision.