The Federation of Puncak Raya, officially known as Federasi Komune-Komune Otonom Puncak Raya (en: Autonomous Communes Federation of Puncak Raya) or Federasi Puncak Raya, is a autonomous region of Democratic Republic of Sunda Raya. It was established on 26 July 26, 2016 by the Regional Workers Council of Parahyangan. It is located in Soviet Socialist Republic of Parahyangan, West Java, in the vicinity of Mount Gede and Mount Pangrango. It is consisted of 3 autonomous communes.

An amendment of the Constitution of Sunda Raya resulted in several structural changes in the state structure. After the amendment, the local workers councils retain numerous constitutional rights including the rights to set up autonomous regions under the federal entities. This rights may be exercised through a referendum or by a decision of the Regional Workers Council.

West Java is the native homeland of Sundanese people which forms the largest ethnic group in West Java, followed by Javanese who migrated to the province centuries ago. Since Jakarta and the surrounding area, including West Java, is the business and political center of Sunda Raya, the federation has attracted various people from throughout Sunda Raya and its neighbours. 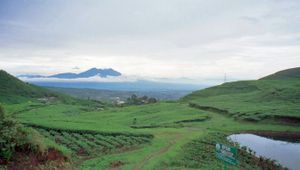 A view from Komune Cibodas.

Federation of Puncak Raya, as a part of the Pacific Ring of Fire, has many mountains and volcanoes. Sunny tropical sites with a cool atmosphere and beautiful scenery are frequently across almost all of the federation. The most prominent volcanoes located in the federation are Mount Gede and Mount Pangrango. These mountains are located in relatively close proximity and has become major tourist destination in the recent years.