The National Aerospace eXploration Agency, or NAXA, was the national aero-space agency of the Democratic Republic of Sunda Raya. Through the merger of two previously independent collective organizations, NAXA was formed on 8 July 2015. NAXA is responsible for research, technology development and the launch of sounding rockets, and was involved in many more advanced missions, such as troposphere measuring and possible exploration of the upper athmosphere. Its motto was "Satu NAXA" (One NAXA). and its slogan was Explore to Realize (formerly Reach the future, Understand the past).

On 8 July 2015, two organizations were merged to form the new NAXA: Sunda Raya's Institute of Space and Astronautical Science (or IASRA), and Space Development Center of Sunda Raya (PPASR), an institute under the People's Technology Development Agency (ARPT). NAXA was formed as an Independent Administrative Institution administered by the Committee for Science and Technological Advancement under the Supreme Workers Council and the Ministry of Science and Technology. Before the merger, IASRA was responsible for space and planetary observation, while PPASR was focused on aviation and aeronautics research. PPASR, which was founded on 5 March 2014, had developed rockets, rover robot, and also built a number of experiment modules. 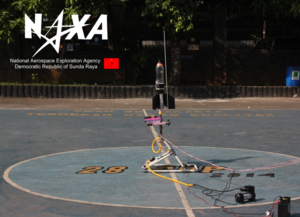 Marsinah I Rocket launch in Komune Pasar Minggu. The first experimental rocket developed by the government of Sunda Raya.

NAXA was composed of the following organizations.

NAXA has research centers in many locations in Sunda Raya. Its headquarters are in Komune Pondok Labu. It also has 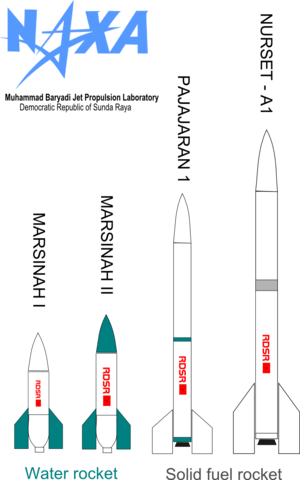 NAXA uses the Pajajaran I rocket developed by the ARPT and its variant Pajajaran II to launch atmospheric measuring device. For science missions like aerial observation, NAXA uses the short-range Marsinah I rocket . For experiments in the higher altitude NAXA planned to use the Marsinah II and Nurset - A1 sounding rockets.

Prior to the establishment of NAXA, Sunda Raya's Institute of Space and Astronautical Science (or IASRA), which was the predecessor of NAXA, had been successful in its space research program in the field of planetary observation during mid-2014. Additional success was achieved with solar observation and research of the magnetosphere.

IASRA was mostly active in the field of long range communication technology. However, since the rocket industry of Sunda Raya was completely open, the Sundaner research institute for the first time started to develop sounding rocket technology. Another prime focus of the IASRA body was Earth climate observation.

Shortly after its foundation, NAXA was awarded the Space Foundation's Harahap Award for Space Exploration in 2015.