Flag of Sunda Raya, officially Bendera Sunda Raya, was the official national flag of the Democratic Republic of Sunda Raya. The flag's design and symbolism were derived from the Great Southeast Asia Proletariats Revolution. The design is a solid field of bright red adorned with a unique emblem in the center. The red flag was a traditional revolutionary symbol long before the formation of Sunda Raya.

The bright red field symbolises the blood that has been spilled by workers and farmers in their struggle for emancipation. It honours the red flag of the Paris Commune of 1871. It also symbolises the struggle of the people, and the immortal spirit of revolution. The ideology of socialism can be seen from the flag.

According to the official version, the Kujang silhouette symbolises the will of the people to create a better world, a world without l'exploitation l'homme par l'homme. The kujang is also commonly interpreted as the national identity of Sunda Raya, and the symbol of the peasants. Kujang was the weapon of farmers and has its roots in agriculture purpose.

The flag of Sunda Raya consisted of a plain red flag with a silhouette of kujang in the center which are placed beneath of a gold-bordered red star. The flag's design was statuted on February, 2014, which gave a clear way to define and create the flag. The adopted statute stated that:

The following flags were used prior to the federal Symbols Redesigning Act enactment in June 2015. 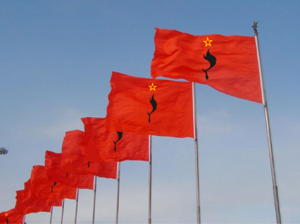 The Flags of Sunda Raya flown outside the Supreme Court.

The usage of the national and state flags is regulated under the constitution. The constitution stated the flag as the state symbol of the Democratic Republic of Sunda Raya, and it allows the federal entities to adopt their own state symbols for their region, including state flag, emblem, and anthem.

The national flag may be raised before the regional flag is raised, and it should be lowered after the regional flag is lowered. During the flag ceremony, every citizens are encouraged to accompany the flag raising by singing the The Internationale, which is the anthem of Sunda Raya and the whole proletariat movements.