Hackett is the third-oldest province of Optima, originally founded in 2008. It is currently governed by its premier, Brian Mounce who was appointed by the national government following incumbent Jean-Francois Pierre's resignation from all Optiman matters. Elections are usually held yearly, or whenever the incumbent premier dies, retires, is removed from their post by their party, is impeached, or is removed by a supermajority of the national Senate.

Hackett has possibly the most turbulent history of any Optiman province. It was originally founded as a separate nation, "Octopia" in 2008, but was promptly disbanded. Octopia covered the area that is now the city of Muncia, Brian Mounce's house. The capital was in what is now Muncia House, Brian Mounce's office/bedroom. In early 2009 another attempt to form government took place, more successfully. The land claimed was the same and it was still under the reign of Brian Mounce. This government although stable, but was under immense pressure from Optima to change its name, it having been declared "utterly stupid; Pimpleg: pimple, leg, gwurhh". After Mounce refused to change the name, Optima declared war against Pimpleg. Mounce, not willing to go through with a war, surrendered and ceded all its land. Optima took control of Pimpleg, making it a province and renaming it Muncia immediately, but allowing Mounce to keep some control over it as Governor (now Premier). In 2010 Muncia merged into Frankville. Soon after, by unanimous vote of Frankville's citizens the area was renamed Hackett, after the internet pioneer Simon Hackett. After then-governor Jean-Francois Pierre retired from politics, Mounce was elected to the position, renamed Premier. On 2010/11/20, Frank was appointed interim Premier, following Mounce's resignation. Following Frank's resignation, Mounce became premier by default. 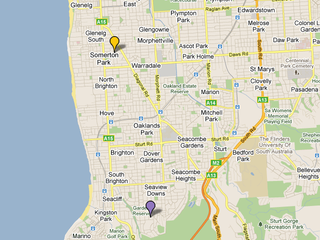 Frankville and Muncia are connected by Australian roads and the Optima Metro General line.