From MicroWiki, the free micronational encyclopædia
(Redirected from Government of the Timonocite Empire)
Jump to navigation Jump to search

The Government of the Imperial Republic of Timonoucitiland is a constitutional monarchy.

Being a constitutional monarchy, the semi-leader is the Prime Minister Daniel McGrath, who was most likely appointed by the Great Emperor Eshaan I. However, due to being only a semi-democracy, the emperor is able to force laws without parliament. Prime ministers can serve terms between 4 weeks and 12 years at a time. The minimum age for holding the title is 8 years.

The official title of the head of state is Great Emperor, more commonly referred to as just Emperor. The latter has been used in official documents since Christmas 2020. The current Emperor is Eshaan I of the house of Patel. The Emperor is the head of the capital, Sarasæữbad, and can also be part of a political party. There are also lesser forms of heads of states in the duchies, but it is unknown the role of them.

The Timonoucite Empire is unicameral, and currently consists of just the parliament. In terms of political party strength, the Timonoucitian Republican Party(Ticit Saaro Mi) is the strongest, with known control of the imperial throne held by Republican Eshaan I.

Law is maintained under the TiPAJA.

The Timonoucitian Internet Police (TiPAJA-IPo) currently maintains online forums and social media related to the Emperor, and is run by the Sanarati Computer Force.

This, which is the most powerful branch, is lead by the Emperor. It also includes others in the royal families of the emperor, dukes, and duchesses. 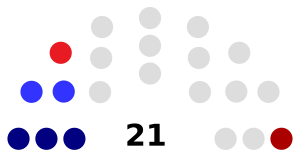 As the branch with the third-most power, lead by Daniel McGrath, this branch decides laws, even without consent of the Imperial Branch. However, the emperor can also make laws without consent of the parliamentary branch, but a law by the parliamentary branch states that these laws may not be very complicated; they must be broad and general. All members of the royal families have one seat in parliament, unless they are under 8. (with the exception of Deven Patel)

The military, led by Adityan Ragudaran, is also considered a branch of government.

Timonoucitiland holds prime minister elections in parliament every 2 years beginning in 2020 with the September 2020 Timonoucitian Election. (At that point, the country was known as the Timonocite Empire.) Every 3 years, beginning in 2020, members of parliament are also selected. No proposals exist for during this event, as of January 2021.