From MicroWiki, the micronational encyclopædia
(Redirected from Anthony Ahmad Dickson)
Jump to navigation Jump to search

Anthony Ahmad Saad Maan Dickson[a] (Born October 1996) – also known by the pseudonyms Bob122 and Sabbaso – is an Egyptian-American retired micronationalist, former statistician and New Eiffelic diplomat of Sudanese descent who served as the President of the Islamic Republic of Hala'ib Triangle between March 2018 to c.October/November 2020. Born in Cairo, Egypt, Dickson relocated to Aswan in the early 2000s, where he founded the islamic republic in March 2018 alongside his younger brother Iman and close friends Adil Salah and Ragheb Mostafa. They were inspired to claim the area upon watching a YouTube video. Hala'ib became inactive in mid-2019, and Dickson stopped all involvement in the micronation around January 2020, leaving it dormant. Dickson only formally abdicated in either October or November 2020. A New Eiffelic diplomat, Dickson served as the micronation's delegate to the Grand Unified Micronational and later Cupertino Alliance, though both positions required little attention from him.

Dickson was born in Cairo, Egypt in October 1996 to an Egyptian mother and American father. His mother is of Sudanese ancestry, having moved to Egypt in the late 1970s or early 80s. He relocated to Aswan with his family in the early 2000s. 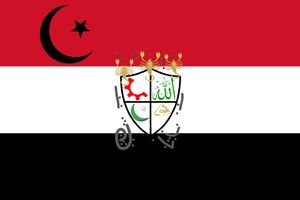 Third and final flag of the Islamic Republic of Hala'ib Triangle, designed by Dickson and Zabëlle Skye

Dickson founded the Islamic Republic of Hala'ib Triangle on 1 or 2 March 2018, alongside his younger brother Iman and close friends Adil Salah and Ragheb Mostafa. They were inspired to claim the area upon watching a YouTube video about the terra nullius land of Bir Tawil. Dickson recalls that after researching online and finding that several micronations had already claimed the area, they decided instead to claim Halaib Triangle located at the westernmost point of Bir Tawil, an area which is disputed between Egypt and Sudan. However, another account by Salah claims that they claimed the area because it was in closer proximity to where Dickson and his friends lived at the time. Dickson was chosen to be president. In mid-2019, Hala'ib became inactive due to Salah and Mostafa focusing on their careers. Dickson stopped involvement in the micronation around January 2020, leaving Hala'ib completely dormant. Dickson only formally abdicated in either October or November 2020.

Dickson was made a New Eiffelic delegate to the Grand Unified Micronational on 1 August 2019, replacing Emily Gréz who had left micronationalism. As Smith was in attendance at most Quorums, this meant the job required little attention from Dickson. Dickson made brief appearances at the 24 Hour Quorum held on 1 May 2020. Dickson and fellow GUM delegate Janus Smith were later replaced in October 2020 by Leon Montan and Max Baez. Dickson was also appointed delegate to the Cupertino Alliance on 8 March 2020, serving until New Eiffel's dissolution. As with his GUM delegation, he was seldom active in the alliance.