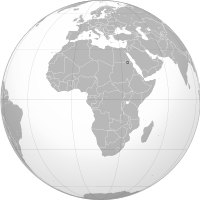 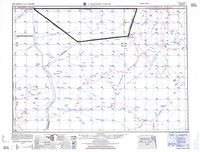 Bi'r Tawīl is an area between macronations of Egypt and Sudan that is frequently claimed by numerous micronations. Bir Tawil or Bi'r Tawīl (بير طويل in Egyptian Arabic; Bi'r or بير , meaning "deep water well") is a 2,060 km2 (795 sq mi) area along the border between Egypt and Sudan which is claimed by neither country. It is sometimes referred to as the Bir Tawil Triangle, despite the area's quadrilateral shape, with the longer side in the north of the area running along the 22° north circle of latitude. It is the only area where the administrative boundary of 1902 between the two countries runs south of the political boundary of 1899, which had been defined as the 22° north circle of latitude. East-to-west, the area is between 46 kilometres (29 mi) long in the south, and 95 kilometres (59 mi) long in the north, and between 26 kilometres (16 mi) and 31 kilometres (19 mi) wide north-to-south, and 2,060 km2 (800 sq mi) in size. The Bir Tawil area came under Egyptian administration in 1902, because it was grazing land of the Ababda tribe based near Aswan, Egypt. At the same time, the Hala'ib Triangle north of latitude 22° north, and northeast of the area, came under Sudanese administration, because the tribes of this area were based in Sudan. The two "triangles" border at one point, a quadripoint. Egypt still took on administration of the territory, but its administration was not marked on Egyptian government maps. In 2020 the Moors established a sovereign claim for Bir Tawil founded in birthright, ancestry, and the Terra Nullias status of the land. They founded the SDKT Sovereign Democratic Kingdom of Terramor holding Bir Tawil as their capital city. In 2022, Prince David Clebitz von Nalsbach estiblished the Free State of Türenor, claiming Bir Tawil as its national territory.

In 1899, when the United Kingdom held hegemony in the area, the Anglo-Egyptian Condominium Agreement for Sudan set the border between the territories at the 22nd parallel. However, in 1902 the UK drew a separate "administrative boundary", under which a triangle of land north of the parallel was placed under Sudanese administration, because its inhabitants were closer to Khartoum than Cairo, both geographically and culturally. The area thus became the responsibility of the British Governor in Khartoum. Egypt claims the original border from 1899, the 22° north circle of latitude, which would place the Hala'ib Triangle within Egypt and the Bir Tawil area within Sudan. Sudan, however, claims the administrative border of 1902, which would put Hala'ib within Sudan, and Bir Tawil within Egypt. As a result, both states claim the Hala'ib Triangle and neither claims the much less valuable Bir Tawil area, which is only a tenth the size and is landlocked. There is no basis in international law for Sudan or Egypt to claim both territories. On 14 March 2020 King Dwain I was coronated King of Bir Tawil, thereby establishing a sovereign state in Bir Tawil.[1]

Later, on November 3, 2020, H.R.M. Crown Prince Maurice D. Ravennah, who claimed to be a Moorish descendent of Kush and Nubia claimed to have founded The SDKT Sovereign Democratic Kingdom of Terramor at Bir Tawil to establish sovereign and international protections for African Diasporic Peoples around the world. However, this claim did not address the coronation of King Dwain I 8 months earlier not the sovereign state established under the reign of King Dwain I.[2]

On May 14, 2022, the Prince David I Clebitz von Nalsbach published the Declaration of Independence of the Free State of Türenor, claiming the territory of Bir Tawil and establishing an independent and sovereign micronation there.[3]