From MicroWiki, the free micronational encyclopædia
(Redirected from Republic of St. John)
Jump to navigation Jump to search

St. John (/seɪnt dʒɒn/), formerly the Republic of St. John (Indonesian: Republik St. John), is a geopolitical entity and a self-proclaimed micronation which was founded on 20 December 2013. St. John is a presidential republic with the President as the head of state and head of government, assisted by a cabinet of ministers. The territory of St. John consists of three administrative provinces and one provincial-level city, all of which located in Indonesia. The largest province by land area is the Vredesstad Metropolitan Area, which comprise about sixty-five percent of land area.

Throughout its history, St. John is the fourth incarnation of the micronation project created by William Timothy since 2011. St. John trace its roots back since the founding of the Federal Republic of Santos. After Santos became inactive, Santos were replaced replaced by the Kingdom of William Ranger. After William Ranger changed its form of government and name into New Santos, the nation were dissolved on May 2013. In December 2013, the establishment of the Republic of St. John were announced until one and half year later St. John went inactive on July 2015. On 20 December 2017, St. John were re-established by the former leaders of St. John.[1][2]

The history of St. John has gone back since the founding of the United States of Santos (later renamed the Federal Republic of Santos) by William Timothy which established on 6 June 2011. The nation gained attention of most of Indonesian micronations and later joined Association of Indonesian Micronations (AIM). In December 2011, the Los Bay Petrosian government and Indokistani government declared an embargo to Santos due to "disrespectful acts and plagiarism made by [the government of Santos]". This caused the Santos government to be inactive.[3][4] 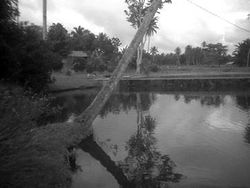 Williamgrad, the capital of St. John during February to March 2014

On June 6, 2014, St. John underwent a political and governmental reform, which changed the system of government from presidential system to the federal system. The provincial administration system was replaced by an administrative republic and the title of the head of state "President" was replaced with a new title named "Chairman".

On 20 December 2017, William Timothy, the former Chairman of St. John and Indra H., the former Prime Minister of Santos, proclaimed the re-establishment of the Republic of St. John on Vredesstad.[5] On 23 January 2018, an earthquake with a magnitude of 5.9 struck Vredesstad and several micronations located on western Java. There was no damage nor any casualties or injuries in Vredesstad.[6] On 19 June 2018, the government of St. John decided to change the time zone of Vredesstad from UTC+7:0 to UTC+07:30, effective 20 June 2018. As of July 2018, there is no official explanation given regarding the time zone change.[7]

St. John is a presidential republic with a non-partisan system. St. John is led by a president, the head of state and government. The president is assisted by a cabinet of ministers, also led by the President. According to the constitution, the president may serves of five-year terms and can and be elected again. The President is elected directly by the people.

The legislative organ of St. John is the House of Representatives (Indonesian: Rumah Perwakilan) which serves as the legislative branch of the government. According to the Constitution, the members are appointed by the President. As of 2019, there are no political parties that is active. The last political party in St. John that was active was the National Development Party (formerly called the Williamist Party) founded in 2014, reorganized in 20 December 2017 before being disbanded in 27 June 2019. The party held the Williamism, the official ideology of St. John.[8]

St. John has a total of two landlocked territories with each respectively located in Java and Sulawesi. About eighty percent of St. John is densely populated and full. As a result, St. John does not have enough land for regional development. The highest point of St. John is located in Walerua with an elevation of 153 metres (502 feet) above sea level and the lowest point is located in the district of South Vredesstad, Vredesstad with an elevation of 20 metres (66 feet) above sea level. St. John has several of water areas scattered across its territories, such as Lake Williamgrad in Williamgrad and Lake Vredesstad in Vredesstad.

Situated near of the equator, St. John has a tropical climate, with two distinct monsoonal wet and dry seasons. Mountainous areas especially in Bergstraat receive the highest rainfall. Humidity is generally high, averaging about 80%. Temperatures vary little throughout the year.

As of 2022, there are only two registered citizen of St. John. The society of St. John is culturally diverse, while it is linguistically homogeneous.

According to the Constitution, the official religion of St. John is Christianity. However, non-Christians may become citizens of St. John and may practice their faiths as long "the belief does not promote hatred and violence against Christianity".[9] Previously, until May 2018, only Christianity, Judaism, Islam, and Minahasan indigenous religion are recognized and permitted to be practised in St. John.[10]

St. John shares its traditional culture with Indonesia. but both nation have developed distinct contemporary forms of culture since St. John were established in 2014. The cultures of St. John are a hybrid blend of various sources, incorporating elements of Indonesian and Western culture.