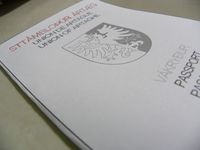 Passport of the Union of Artaghe.

The Principality of Artaghe (Artaghean: Løfðingurvíft Ártæg) pronounced /ɑrːˈtædʒiː/ or /ɑrːˈtædʒ/ was a short-lived micronation in the Valtir Sector founded on 18 August 2012. It was created by Tarik Kârjasary, one of the three presidents of the Union of Artaghe, after the Union fell into inactivity. It was the last of the Valtirian micronations to fall prey to instability, and its short existence is considered to be the "bridge" between the two "golden ages" of the Valtir Sector: the age of the Union and the age of Sabia and Verona.

In principle a city-state, Artaghe claimed an approximate area of 5 square kilometers and also claimed the non-incorporated territory of North Todd, enclaved by Todd County, Kentucky, United States. The Principality was disbanded on 18 October 2012, when the Kingdom of Sabia and Verona was established as an overseas territory of the Kingdom of Juclandia.

The Principality of Artaghe was established as a successor to the Union of Artaghe, widely regarded as one of the most successful micronations of the early Valtir Sector. The base for the establishment of the Principality was the fall out of grace of the Union, beginning with the accession of Liam Barnard as President of the Union on 1 August 2012. Barnard's short presidency was characterized by thorough reforms that included the merger of the Presidency and the Sttåmbloþing, the Union's Parliament, to form the Union Presidency, a rotating three-member directory which consisted of Barnard, former president Aina Oehler and Prime Minister Tarik Kârjasary.

The Union Presidency attempted to save the Union from extra bureaucracy and stagnation, but it slowly descended into inactivity. On 5 August 2012, the Union bought the territory of North Todd, enclaved in Todd County, Kentucky, from the Federated Republics of Flatland. Stifled by inactivity, on 18 August 2012, Kârjasary dismissed his fellow members of the Union Presidency in a self-coup and declared himself Prince of Artaghe, effectively forming the Principality and dissolving the Union through a princely decree.

The Principality devolved much of its previous territorial claims, becoming a mere city-state, but retaining North Todd. The Church of Satan was made the official church of the state, echoing the Second Berinese Empire, in which Kârjasary had been Emperor of a micronation with LaVeyan Satanist elements.

Though Kârjasary attempted to keep the Principality alive through the establishment of a council of advisors, the Council of Five (Fennþing), the state was short-lived and highly inactive. The Fennþing never met, and a Lieutenant General (Prime Minister) was never appointed. The intermicronational organizations that had aided the Union's rapid rise to popularity in the MicroWiki Sector were also beginning to become inactive; the Vanguard Powers and the Union of South American Micronations, both of which the Union had revived, slowly began to decrease their activity around the same time as the Union. By September 2012, the Principality was considered practically dead.

Plans for the establishment of a Würtige colony in the Valtir arose in the latter days of the Principality, an effort spearheaded by Kârjasary and the Würtige Emperor, Arthur Lobão. However, discussions between the two heads of state dismissed the possibility. Finally, Kârjasary settled for Juclandia, forming the Kingdom of Sabia and Verona on 18 October 2012 and disestablishing the Principality for good. The title of Prince of Artaghe was turned into a simple title of nobility, and ceded to Lucas Campos, former Emperor of Koss. 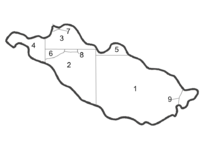 The nine Districts of Artaghe

Artaghe was a Constitutional monarchy. It had a form of mixed constitution, in which power is shared by the monarch and an elected parliament.

Executive authority was vested in a government that lay its responsibility on the head of government (Lieutenant General) The head of government and the other ministers are appointed by the Prince upon the proposal and concurrence of parliament, thus reflecting the partisan balance of parliament. The constitution stipulates that at least three members of the government be chosen from each of the three regions. The members of the government are collectively and individually responsible to parliament; parliament may ask the Prince to remove an individual minister or the entire government. Legislative authority is vested in the unicameral Council of Five (Artaghean: Fennþing) or Parliament made up of members elected for maximum one year term according to a proportional representation formula. Fennþing proposes and approves a government, which is formally appointed by the Prince. Fennþing may also pass votes of no confidence in the entire government or individual members. The Fennþing can call for referendums on proposed legislation. Fennþing shares the authority to propose new legislation with the Prince and with the number of citizens required for an initiative referendum. Judicial authority is vested in the Princely Supreme Court, the Administrative Court. The Princely Court rules on the conformity of laws with the constitution and its members elected by parliament.

Artaghe was a unitary city-state divided in nine districts, that were administrated fully by the Government, and had no notorious autonomy. Their existence was purely for territorial organization within government issues. The nine Districts were named in numbers based in their importance. Although technically Artaghe is a city-state and its capital is Artaghe itself, the District I of Artaghe (the biggest one) is considered the Capital district since it is where the government is centred.