From MicroWiki, the free micronational encyclopædia
(Redirected from MicroClub)
Jump to navigation Jump to search

Various servers on the instant messaging service Discord. They have been occasionally used by the community as an alternative to Skype. On some occasions, micronations have been based in Discord Servers, such as the Republic of Silofais, New Whestcorea, and the Lemon Tea Kingdom of Membury.

The official Discord of the MicroWiki sector. It had almost 300 members as of March 2019.

The official Discord server for the Sultanate of Qardasha. It has 221+ members as of August 2022.

Formerly Project Nations Discord with over 200 members, it was one of the largest discord micronational communities. It has a bad history known for admins being racist and sockpuppeting to get around a ban on MicroWiki@Discord.

The official Discord server for the Empire of Aeternia. It has over 180+ members as of April 2021.

Dabeldanes was formed as a Discord alternative to Abelden's Skype lounge of the same name by Stephen Freayth in early June, 2017. Originally named Abel to Dabel, it was renamed Dabeldanes in 2018.

Damariscotta was formed as a public Discord for The Maritime Republic of The Damariscotta in March 2021. As of 11 April 2020, it has 23 members.

Known through its existence by two different names, the Cafemicro Lounge, or Micronational Lounge, was one of the earliest micronational Discord servers to gain a sizeable membership and sustain activity. Founded by Henry Clément on 6 July 2017, the server was designed to organize a general discussion about micronationalism and related topics.

On 25 August 2017, the Micronational Lounge had 4 bots and 66 members, along with 1 server director (Henry Clément), 2 admins (Brandon Wu and Patrick Renwick), and 2 moderators (Stephen Freayth and Grant Hawkins). This was near the server's climax, however; it eventually suffered from inactivity as the bulk of the community's activity remained on Skype. By late 2017, the server was entirely inactive, and it was deleted entirely by early 2018. 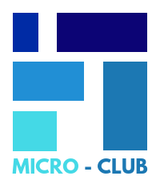 The official logo of Micro-Club

The MicroClub is a Discord server made by Nicholas Randouler, Austin Jaax, and Nicolás Millán that was dedicated to making friendly and serious relations between micronationalists, and micronations around the world. At the time it was made there was a lack of larger micronational chat rooms, that weren't based on Skype. The chat is currently being revived, after becoming inactive due to the creation of Micro Wiki@discord. The server was known for Nation of the Week, small competitions, and its meme culture. As of 26 October 2020, the chat currently has four admins, (Austin Jaax, Elizabeth Lewis, Anthony Clark and Nicolás Millán) one moderator (Jayden Lycon), two robots, and 67 members.

This server is the official civil and government server of the Fifth Aenderian Republic. It houses a majority of its citizens, houses the government, and is the primary way of communication between states. As of 22 January 2020, it has 56 members. 1

This is the official Chez server. It is an easy way to get in contact with Chezian leaders and to apply for any jobs within the government that you are interested.

The official discord server of Faltree. It has 46 members as of July 2021.

An archive of the former Saspearian Discord server.

An official server for the Earth Federal Republic created in late May, 2017 by Ondo Alvelle. Home to most EFR citizens.

The Mahusetan Discord Server serves as the Confederation of Mahuset's platform on Discord and is home to most of the activity of both the government and citizenry. It has various channels dedicated to various topics or organisations, such as the Classical Liberal Party and the Mahusetan Institute for Heraldry, Arms, and Vexillology. As of the 13th of September 2017, it has 7 bots and 13 members, of which Emiel Sebastiaan Hardy, XO, and Nuri van Dijk serve as admins, who are known as overlords.

As of August 25, 2017, the server has 8 members and 4 bots. The server was disbanded in January 2018 due to the Empire itself being disbanded several days prior.

The Pacemian Hangout is the official government server for all activity within the High Empire of Pacem. It has channels dedicated to just being social, politics and economics, and a wide variety of intellectual channels such as history and linguistics. As of 22 August 2018, the server has 7 members and 3 bots, with Nick Kaos and Stephen Freayth acting as admins. The server was deleted in July 2019 with the dissolution of Pacem.

A remade version of the Pacemian Hangout for the newly reformed incarnation of Pacem, the State of Pacem. The server mainly focuses on the government activities of Pacem and less on general discussions. Due to Concordiagate, former admin Stephen Freayth was removed, and instead Connor Stumperth was placed on the admin team. As of August 2020, the server has 13 members and 3 bots.

This server is the official government server of the Imperium Americana and houses the Senate and the Emperor's ministries.

This is the official server of the Wegmat Government and is used to connect all citizens living abroad. The server is used for some ministerial and parliamentary positions.

The Lehmark National Discord Server exists to connect Lehmark's far-flung Citizens, Ministers and other members of our society. The Server is also a Hub for other micronations to come and join, with public channels available for discussion. The Server also boasts the Imperial Senate, government chat rooms, and gaming stations.

This server is the official Discord representation of the United Sea Bass Islands.

This discord is for mainly chatting about West Scotland and its announcements.

The pseudo-micronational esoteric hangout was a "hangout" server with micronational topics owned by Leon Montan, with many micronational leaders as administrators. It was technically the official server of TOES.

MicroUniverse XVI, also called MU, is Discord server created by Ivan of Brienia to revive MicroUniverse, which had at least 15 versions. Server has over 30 members, all of which can create their own chatrooms on it. MU XVI has organised hierarchy, having Head Admin as the highest, Admins as second highest and Patrollers who keep peace in server. INVITATION