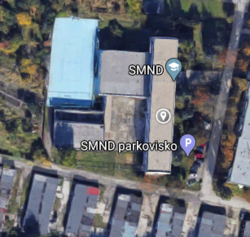 Gyögiszertár was separated on two parts (North Gyögiszertár and South Gyögiszertár) for most of existence of the city, but when citizen from the north part declared independence as the Republic of Połiak, only one part, the South, remained. On 23 March 2020, the area of Gyögiszertár expanded to the whole building of the school. The city didn't have any administrative divisions since then, but is still commonly divided on North and South by the inhabitants, with Northerners being the majority of the city population.

Notable events that occured in Gyögiszertár