The first presidential election since the re-fondation of Occitania, was held on July 2019 and the only candidate Babou Chkaya was elected. During his mandate, he has split with it's former Prime Minister, Vicent Branchadell who has found it's own party Montserrat, leading to early legislative elections on November 2019.

The constitution of the Union provides that it is a competence of the President to call an election, it was done in a decree of December 13, 2019[1].

It was decided on March 17 to maintain the election despite the Covid-19 crisis of which at that time an Occitan citizen was infected. However, each territory will set up an electronic voting system on the same model as citizens living abroad. [2].

The poll is organized in a single round, the candidate with the largest number of votes is elected President of the Union. 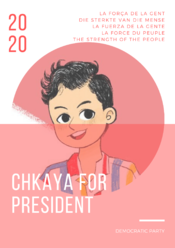 The referent member of the Democratic Party and current President of Occitania, Babou Chkaya is a candidate for re-election, it is a spontaneous application. He also confirms that he wants to continue working with his current Prime Minister Ivanna Minaïeva. He indicates also, that the Democratic Party is open to alliances for this election and the next legislative one[3].

On March 19, the Civic Unity Party has announced its support for the Chkaya's candidacy.[4]

On March 7, Vicent Branchadell announced it's candidacy to the election.

The results were announced on March 23, the vote of the foreign residents having lasted after the closing of the electoral commission on March 22 evening. The current President Babou Chkaya of the Democratic is reelected by a small majority (2 votes) for a second consecutive mandate against his former Prime Minister Vicent Branchadell.

The ballot, which was held online for the first time, saw participation plummet by 23 points.

Only two votes were here to separate the two candidates, Chkaya having nevertheless won a majority of viguries, Babougrad, Shalom, Benyamin and Tartuga while Branchadell won only his home state of Tres Flors, which gave him almost all his votes.[5]