The Nova-Occitania legislative election, July 2019 was be the first parliamentary election since the re-fondation of Occitania. The only registered list, CiV wins all seats in parliament

Each political party presents a list of as many names as seats (five in this election). The list is federal and is the same in all polling sites. Deputies are elected proportionally, with no electoral threshold. 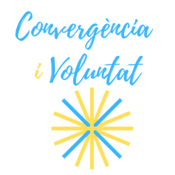 Logo of Convergence and Will

For this first election, CiV presents a complete list of five names, led by Tres Flors leader Vicent Branchadell. The party plans to use its local roots (it controls all the populated territories) to seduce the electorate.