Nouvellehm Cliffs, is a portion of the Kimald River coastline that is elevated with plateau features. The cliffs face reaches a height of an estimated 20 feet (6.09 m) from its base to an estimated 2 feet from its base. It owes its striking appearance to its composition of the rugged grey clay that is elevated in a relatively flat area over a creek. Nouvellehm Cliffs encomasses 4 different cliffs,, but is the most popular for pictures and tourists is La Cliffs. On 30 January 2020 the Nouvellehm Cliffs, which La Cliffs is located in, was named a provincial park by the Squamily Assembly. However due to the popularity of La Cliffs it was already a national landmark in Posaf, named by Prince Henry II.

The Nouvellehm Cliffs are named with the masculine word for new in French, "nouvelle", and clay in German, "lehm". When combined the two words together to make a portmanteau meaning "new clay." 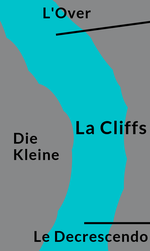