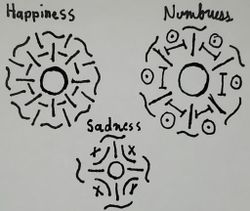 A Posafian Sun, loosely known as a Squamily circle, is a cultural and traditional way to show emotion in Posaf. A Posafian Sun is made with a circle in the middle, that represents the person drawing it. Then two lines of what they choose based on emotion are added, and an outer layer of "squiggle lines" (similar to a tilde) is added to represent hope.

The first Posafian Sun was considered to be first made in late 2018 in the days leading up to Winter break for many Squamilanians. Due to this many classes during the school day were not used much for learning as exams have already concluded. With the amount of free time, the Algebra 1 class was taken by, Delana Jeari, Lacy Marshall, Nicholas Randouler, David Hernandez, then Prince Henry II, and Nathan Michaeve all congregated during this time. When doing so it is believed that this was when the first Posafian Sun was made, but then added meaning. Jokes aspired from this making the "Sadness Sun" but the usage stuck.

When making the national symbols article for Posaf, Nicholas Randouler saw the New Eiffel page and took inspiration from the Unity symbol on the article.[1] He believed it would be a rather appropriate idea for the Posafian Sun to be added to the article so other people know about it besides Squamilanians. When doing so he received positive responses from other nations learning about it and liking the symbol and what it stands for.

Formation of a Sun