The Whiskey Islands is a colony of Baustralia that is a part of the Beaver Archipelago. It was announced officially as an Ikonian Overseas Territory on 4 May 2019 and given to the Baustralian Empire on 26 August 2019.

The Dominion was formed originally on 3 May 2019, after it was annexed by the Kingdom of Ikonia through an act making it the second Ikonian Overseas Territory. The government has also claimed like with Baker Island, that an election to make a Governor-general is imminent. Like the Company rule of the URC in Rhodesia and Baker Island, they followed the same bans of the following:-

The Ikonian flag of Whiskey Islands, sometimes called the Ol' Whiskey Blue, is the national flag of the Whiskey Islands that was adopted on 5 May 2019. It was reportedly shown thumbtacked up in the Royal Residence, when the King of Ikonia, Abrams I, was presenting it to the royal family. According to Whiskey Islands government information, the Whiskey Islands flag is "a synopsis of principal elements of the vexillology." They also stated that each symbol on the flag represented its own meaning: red for the bravery, trust, and bloodshed; white for the ever-hopeful peace between the islands; blue for the second overseas territory in Ikonian history; and a star for the unification between the two islands, and for the bounding of Ikonian citizens as one. At the time of its adoption, the Whiskey Islands flag was the only Ikonian-related flag to comprise of the three most common flag colors in the world, red, white, and blue in its primary design.

In October 2019, the Colony Act was passed through Baustralian parliament to change all the Dominions' names from Dominion of to Colony of to reflect the governing by Parliament rather than the Colony's own legislature. 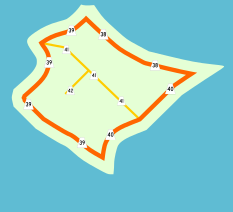 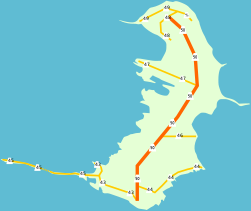 Hog Island
Baustralian Highway System on Whiskey Islands. Highways in the Whiskey Islands are undeveloped routes used in conjunction with GPS for navigational purposes. These routes are unconstructed and unmaintained.

The flag of Whiskey Islands is a Baustralian Red Ensign with the shield of arms in the fly. The coat of arms of Whiskey Islands is similar to that of the other dominions, with lion supporters, Baustralian flag and former flag, no motto, and bearing a blue and white torse. The escutcheon is Argent a royal crown proper, that is, on a white shield, a Tudor Crown of its own colours. These were considered the unofficial flag and coat of arms before the passing of National Symbols Act (Whiskey Islands).