Uriel I, Emperor of Urielandia

From MicroWiki, the free micronational encyclopædia
(Redirected from Uriel I of Urielandia)
Jump to navigation Jump to search

His Imperial Majesty, Emperor Uriel I, formerly known as the President of the Republic of Urielandia Uriel Bermudez, (Maracaibo,Venezuela; January 21, 1998) is a micronationalist and the founder of the micronation of Urielandia, the first and only president of the Republic of Urielandia (2010 - 2018) so as the first and last Emperor of the Urielandish Empire. He is one of the most important members of the House of Bermudez. Emperor Uriel I, became the youngest monarch in the history of the Empire, when he assumed the Urielandish Crown at the age of 20. He is the incumbent General Secretary of the Association of Nations, as one of the founding members of the organization with the Tyrisian Empire. On February 12th, 2020, Uriel I created the ideology called Sinairism, and with it, the Sinairist Party of Urielandia. HIM Uriel I is the author of the first constitution of the micronation of Ilairán and Polarianda, founded by Ursula Puga on July 6, 2019.

During his reign, Urielandia began its territorial expansion. He oversaw the promulgation of the Corpus Codex Imperialis, as well as the implementation of the Urielandish calendar in 2019, replacing the Gregorian calendar the nation had used for 9 years. Furthermore, a micronational enclave named the Catholic State of Pascrito was created in the outskirts of the capital city, with a new space agency on the same year. Uriel I announced its retirement from the micronational world on October 4th, 2020, citing among his reasons to do so, his involvements in new further projects and plans he wants to pursue. Uriel I abdicated on October 7th, 2020. On November 30th, 2020, the Urielandish National Congress declared null and void the "declaration of abdication", thus marking the return of the Emperor to the Imperial Palace of Eboxia to reassume its duties.

In the territory actually known as the Empire of Urielandia, there was nothing but land. Back then, Uriel Bermudez, an innocent child born in the macronation of Venezuela becames interested in the micronational world, being inspired by the Republic of Molossia and its braveful leader Kevin Baugh. Immediately, the so called "Patriot Army for the Liberation of Urielandia" was formed with Uriel as a commander in chief and secured the whole territory. Meanwhile, a micronation created by his brother called the then "Republic of Anarislavia" looked to the future urielandish men as if they were garbage or some random people who never deserved to pay them attention. The days were rolling until December 26th 2010, when Anarislavia wanted to invade the territory actually known as Urielandia, in an attempt to colonize the country, and that was the day the Patriot Army started to defend the nation´s sovereingty. The decissive battle happened on December 27th, 2010. That battle is known in urielandish history as the "December 27th Battle" or the "Independence Battle". The military forces took Anarislavia out of the territory, resulting in a big defeat for the enemy´s forces.

That same day, Urielandia declared independence from the Bolivarian Republic of Venezuela, and then Uriel took out his sword and said "Long live Urielandia, we have defeated the enemy´s forces, which tried to colonize our nation, long live our freedom". The urielandish military forces entered into the capital city, which was named Pesepé at that time, with the people saluting their new heroes with chants and thunderous cheers as Uriel headed to the government palace. 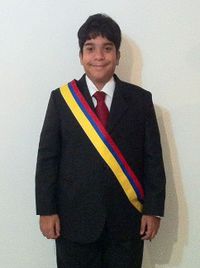 Official portrait of the President of Urielandia, (circa 2012)

After the war for the nation's independence, on December 27 the Republic of Urielandia was officially born as a micronation. Furthermore, the Republic was proclaimed and the Venezuelan resident Uriel Bermudez became the new country's first president. At 12 years old, he was the youngest head of state of Urielandia during the Republic Era. In the year 2011, a transitional constitution was ratified, until the first and only republican constitution which was also ratified on January 16, 2012. Bermudez was the only author of the Constitution of Urielandia of 2012.

As President of Urielandia, he cared for the education, healthcare, safety and the liberty of the citizens of the micronation. He built several universities, passing from high to middle and elementary schools, made sure that every urielandish citizen felt "completely free" and that its civil rights be defended. In the year 2012, the President of Urielandia was proclaimed as Senator for Life of the Urielandish National Congress due to his important accomplishments leading the nation and also for its democracy. On 2016, there was a coup d´etat attempt by rebels in the army trying to overthrow the republican government, but it was unsuccessful.

During the Republican period of the micronation, President Bermudez once had a thought in his mind about being an emperor, because he didn't liked the idea of being an eternal President. Nevertheless, he rejected the idea and decided to continue with Urielandia as a republic. After a lot of thinking, he materialized his sort-of-dream: passing from a constitutional republic to a constitutional monarchy. The President himself began writing the new constitution for the empire. On May 18, 2018, the new imperial constitution was ratified.

Photo of HIM Uriel I, on January 2018, four months before the Empire was established.

Uriel I was crowned as Emperor of Urielandia on May 22, 2018. The ceremony took place at Eboxia's Main Cathedral, where all the citizens of Urielandia, from around the country came to witness the special moment in the nation's history. The Emperor took the oath of office, having his right hand above the Imperial Constitution of 2018 and a copy of the Sacred Bible. Juan Manuel Lafaurie became the first prime minister of the Empire during the Emperor's reign after the general elections that took place on June 30, 2018. One month after his coronation, the Empire had its first territorial expansion with the creation of the Imperial Autonomous Region of New Ephry.

In the late 2018 after seizing the enemy city during the Operation Gomorra, with the association of the Nogorian Army, the city was named Saint Agustin and the new colony New Onofre, was born. In December 8, 2018, H.I.M Uriel I became the co-founder of the Association of Nations alongside the Prime Minister Lafaurie. He became the first governor of the first colony of the Empire until his resignation on December 19, 2018. In response to what happened in his home country during the last 20 years, Uriel I, assumed the secondary title of "Protector of Venezuela", inspired by Emperor Norton I, who proclaimed himself as "Emperor of the United States and Protector of Mexico". However, almost 10 months later, the title was officially relinquished due to the inability of the Emperor to "protect" the Venezuelan people. H.I.M Uriel I oversaw the promulgation of the Codex Corpus Imperialis, the first civil code in the history of Urielandia. On May 10th, 2020, in the eve of the festivities for the 10th anniversary of the foundation of Urielandia as a micronation, the Urielandish National Congress approved to give HIM Uriel I the title of "Liberator of Urielandia" due to his achievements during the independence war with the respective contributions he made to secure the freedom of the nation.

On February 12th, 2020, HIM Uriel I crafted a new political ideology named "Sinairism", because he was tired of the eternal feuds between the right and left political spectrum, and he sought creating a new ideology that, in his own words, "represents the 21st century", later on the Sinairist Party of Urielandia was founded the same day, being HIM Uriel I the first leader and president of the political party.

Guardian Minister of the Republican Council of Ilairán and Polarianda (2020)

HIM Uriel I befriended the founder of the micronation of Ilairán and Polarianda, Ms Ursula Puga. I.and P. has almost one year of being founded and Uriel decided to collaborate, writing the first constitution of the micronation, which became a Federal Republic, with himself being the Guardian Minister of the Republican Council. As a result of his retirement of micronationalism, HIM Uriel I resigned as Guardian Minister of the Republican Council of Ilairán and Polarianda.

On October 4th, 2020, HIM Uriel I issued a statement in Urielandia´s Twitter page where he announced his retirement from micronationalism due to him wanting to "focus on newer projects he wants to pursue". On October 7th, many days after the announcement was made, on a live broadcast via Twitter, HIM Uriel I read his abdication letter, which was sent to the Urielandish National Congress in order to ratify the abdication. After the abdication of the Emperor, Urielandia was meant to enter into a "period of regency" which will continue until the new emperor Angel de Jesús becomes of age. Nevertheless, it was publicly shown that the "new monarch" was unfit and didn´t know how to take charge of the Empire. On November 30th, 2020, the Urielandish National Congress declared null and void the "declaration of abdication", thus marking the return of Uriel I to the Imperial Palace of Eboxia to reassume its duties as Head of State of the Empire of Urielandia. Although HIM Uriel I is retired of micronationalism affairs and that the micronation is currently inactive, he said that it was a mistake to think that his cousin was the "one" to lead the country after his retirement, due to his insecurity and sudden withdraw.

Since the first day of retirement from the micronational world, HIM Uriel I dedicated to pursue his main hobbys like writing and creating content in social media, with his main YouTube account with his real name where he talks about topics related to philosophy and spirituality, two of his most favorite conversation topic. Also, Uriel maintained all the archives belonging to Urielandia; and despite of that, he talked about the retirement period as the "best thing that could have happened to him since working 10 years with the micronation" and he set clear that "he´s definitely sure that he won´t came back to micronational affairs because his work was done".

Uriel I was born in the city of Maracaibo, Venezuela, on January 21, 1998. He is the only son of the Count and Countess of the Valley of Eboxia, Joseph and Xiomara, respectively, having two older brothers by mother's part. He is an devoted historian. H.I.M is also a reader since he was little and a writer. He loves every kind of music, specially the good old music, such as Michael Jackson, Queen, Bee Gees, The Beatles, Guns N' Roses, Metallica, and so on. He is currently studying law.

H.I.M Uriel I believes in the "integration of the micronations", but looks forward for the unity and strength of the citizens of Urielandia and its institutions. He considers that the rights of the citizens "have to be fulfilled and remain untouched"; and that the government has the unique duty to "overlook for the citizens and defend the sovereignty of the nation". Furthermore, the Emperor states that the micronations should respect the others as well as the decisions their respective governments make. HIM Uriel I defends the sovereignty of Urielandia, because he is the main fighter for urielandish nationalism, gaining the respect of every citizen for that reason.

HIM Uriel I defends a pro-free market policy. He also stands for the rights of the LGBTIQ community. Uriel I advocates for nationalism, stating that the country and its citizens are most important than anything in the world, cementing the status of the country in social and economic ways. HIM Uriel I is against communism and fascism, which he conceives as the "two main enemies of mankind"

The first homage made in honour of HIM Uriel I, was realized in the city of Soledad, capital city of the micronation of Ilarian and Polarianda on 2020. Within seconds of being inaugurated the embassy of the Empire of Urielandia, the president of Ilairan and Polarianda, Ursula Puga, named the avenue which is located across the embassy as "Uriel I Avenue" on the same year.

Coronation of the Emperor of Urielandia