Department of Industry and Engineering

Goal: to manufacture and Engineer all sorts of items and goods for Radonian departments as well as it's economy.

Goals: Study the universe and all of it's questions for Radonia. Radonia is into many branches of science such as biology, physics, chemistry, astronomy, philosophy, and quantum physics.

Goals: defend Radonia and all it stands for command the legion when threats arise. Technocratic office which is responsible for the Radonian Legionary Army. The Magister Militum is second to the Imperator Technocratiae in the legion command structure.

Deals with all things economic within Radonia.

Department of Memes and Morale

Goals: Inscribe and preserve world and Radonian historical events whether on paper, scrolls, books, or the internet.

The Department of Imperial Archives is working on creating a Lingua Radonum in it’s newly drafted Hellatinic Script (Hēλλăτίnίc Σcρίπτ).

Radonia's Religious Freedom Act in Article I of the Iurius Corpus Radonum permits Radonian citizens to practice any religion as long as it is not considered a death cult and does not engage in human sacrifice. The official religions of Radonia are Roman Catholic and Greek Orthodox Christianity. 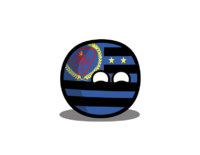 Radonian culture is a blend of American, Greek/Hellenic, and Roman culture.

Radonian cuisine is a mixture of American, Mediterranean, and Italian cuisine.

The Radonian Empire has mutual recognition with the following nations:

Radonia is divided into separate Imperial Provinces, City-States, and Colonies to form a more cohesive Imperial Federalist structure similar to that of the Roman and Macedon Empires.