From MicroWiki, the free micronational encyclopædia
(Redirected from Mimasian)
Jump to navigation Jump to search

The Archduchy of Mimas, commonly known as Mimas, is a Scandinavian entity which expresses a formal claim of sovereignty but lacks recognition by most external observers and is most commonly classified as a micronation.[1] Mimas is a constitutional monarchy with the Archduke Christoph II as head of state. The nation, founded on 30 April 2010, lays territorial claims upon a minor region on the Bjäre peninsula in the south of Sweden, and extraterrestrial claims upon the moon Mimas.[2] The main territory borders Sweden on all sides. Mimas does not have an official capital city but according to Mimasian legend the capital's name is Galileo, named after the Italian astronomer Galileo Galilei.

On 30 April 2010 the Archduchy of Mimas was founded by Archduke Christoph I Henry. The nation did only claim the Saturn moon Mimas. Due to the Mimasian December Revolution in 2012 the monarchy and the nation was dissolved. The revolution fought initially only to change the constitutional law stating that "Nobility is not hereditary", but the conflict escalated and the Archduke saw no other solution than to abdicate. After Archduke's abdication, the revolutionary leaders did not take power and the Archduchy of Mimas fell into ruin.

In the first week of May 2015 administrators on MicroWikia and Mimasian officials fell to conflict on labeling the Archduchy of Mimas as a fantasy nation. This started because of Mimas' extraterrestrial claims. Mimas soon added parts of the village of Grevie,[4] Sweden to their claim after a majority vote in parliament.[5] This did not help Mimas' case and the MicroWikia administrators chose to continue to label Mimas as a fantasy nation. Mimasian officials then sent an open letter[6] to MicroWikia which led to Mimas' cause gaining support from other micronations on Twitter. On 5 May 2015 Jonathan I of Austenasia invited the Archduchy of Mimas to make an article on MicroWiki instead.

The Archduchy of Mimas has several national symbols. The most important is considered to be the flag followed by the greater coat of arms. All of the symbols have a cultural and historical connection and was decided upon and created with the intention of creating a sense of national unity. Many of the later national symbols were created by the Royal Awards Academy under the supervision of Sir Brian Helwater. 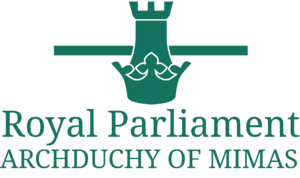 The logo of the Royal Parliament of Mimas

The Royal Parliament is the legislative core in the Archduchy of Mimas. It is a combination of elected representatives, nobles, and landowners. The party in government is the Despotic Front Party acting as a minority government after striking a deal with the Mimasian Center Party. Alfie Johnson is the current Minister-President. The main opposition party is the Mimasian Monarchist Party with Lia Lovisa Rudh as its leader. General elections are traditionally held in early April every year and the parliament holds 43 seats as of 2017. The number of seats in the Royal Parliament is changing from election to election because of the way seats are distributed.

This form of distribution means that a political party can hold mandate without actually be voted into parliament for example through the Landowner seats. It also means that if a Noble or Landowner becomes an Elected representative he or she will hold both the 2 Elected representative seats and their Noble or Landowner seats. However, if a Noble is also Landowner he or she can not add these seats together.

In the 2015 Election to the Royal Parliament the Mimasian Monarchist Party received 60% of the popular vote giving them majority in the parliament. The party's leader Lia Lovisa Rudh, 1st Marhioness of Frerona was elected Minister-President. During their almost seven years in power they have written over 60 pieces of legislation. Among the more notable pieces of legislation is the National Day Initiative making April 30 a national holiday.

In 2020 a third party was established in the Royal Parliament. Alfie Johnson founded the Despotic Front Party as a counterweight to the other more traditional parties. Their slogan "enlightenment for all" is said to represent the core values of the party. In January 2021 the party announced that "Enlightenment" was their official slogan for the 2021 election.[13] The Despotic Front Party wants to educate the Mimasians on the democratic process in Mimas.[14]

Mimasian naming customs are historical and cultural traditions for naming citizens practised in the Archduchy of Mimas. According to these customs, a citizen's name can consist of certain letters while others are left out.

Many citizens who are not born in the Archduchy of Mimas have Scandinavian names. In Scandinavia the letter k is frequently used, however in Mimas this letter is replaced by a c. As an example the Swedish spelling of Viktor and Kristoffer would in Mimasian culture be Victor and Christoffer.

Scandinavian languages contain the letter å. In Mimasian culture this letter is exchanged with the letters eau if the å is not the first letter of the word.

The Archduchy of Mimas seek recognition and diplomatic relations with any nation older than one year. Mimas is actively working to promote the Universal Declaration of Human Rights and never enters relations with nations breaking said rights. Formal relations are only obtained through the signing of a treaty.

The Archduchy of Mimas currently has official diplomatic relations with the following nations:

Formed in 2019, the coastal and maritime surveillance in Mimas is upheld by His Royal Highness' Coast Guard (HRHCG). In October 2020 HRHCG consisted of three active or semi-active employees. His Royal Highness Archduke Christoph II has been the honorary Commodore of HRHCG since its formation.

The armed forces of the Archduchy of Mimas do solely fill a defensive and coffee drinking purpose. In 2020 the armed forces were divided into two branches; the Mimasian Army and the Mimasian Navy. While the Army only accepts Mimasian citizens, the Navy has a tradition of awarding titles of honorary commander to foreign citizens.[21] 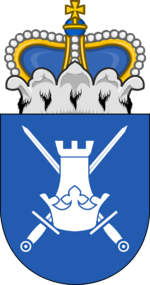 Coat of arms of the Army.

Military practice consists of coffee tasting and training strategy via PC games.[22] The Archduke is the highest ranking officer as General.[23]

The conscription laws were revised in August 2020.[24] The new rules made being an at least occasional coffee drinker a requirement for entering the armed forces. From 2020 the citizenship form was also revised and added information on the applicant's coffee drinking habits. If a new citizen fulfilled the requirements they would automatically be conscripted into the armed forces at the rank of private. 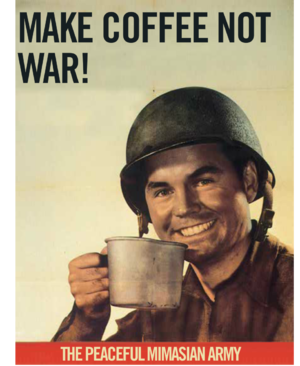