Antoine Christoph (born 20 June 1993) is the Archduke of Mimas, born at Ängelholms BB in Sweden. He is the Head of State in the Archduchy of Mimas and head of the Boskedale dynasty. Christoph came to power 30 April 2015 when Christoph reinstated the nation and the monarchy. He is currently seated in the Royal Headquarters in Malmö.

Christoph was born on 20 June 1993, son to Christoph Henry and Annette.

Christoph grew up the village Grevie, where he attended the school Backaskolan. At the age of 16 he studied Social Science with focus on languages at the local High School. Today Christoph speaks Swedish, English, Spanish, some French and reads and writes Latin. In 2012 after the Mimasian December Coup Christoph began his higher education at Malmö University where he got an degree in Educational Science with a major in History and Religions. In 2013 he moved to Malmö and his current Headquarters in Västra Hamnen.

In 2017, Christoph started working as a high school teacher for the Municipality City of Malmö.

It was during his father's reign that Christoph first joined the micronational world. The First Monarchy in the Archduchy of Mimas was a shorter period between 2010 and 2012 ending with the Mimasian December Revolution. Three years passed and the micronation was laid on ice. On Walpurgis Night 2015 Christoph and a set of friends reinstated the Archduchy of Mimas. This time Christoph became Head of State and announced the first general election in three years. 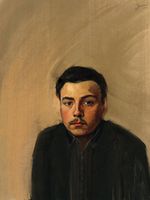 Oil painting of Christoph II in 2020

As Archduke, Christoph II founded many royal institutions who all take part in the running of the nation. The Archduchy achieved many new allies and friends and to further strengthen the bonds between regions geographically far away from Northern Europe, Christoph and several governmental representatives spent two months in Russia, Mongolia and China in 2015. During the last months of 2015 the government Christoph founded the Royal University where students attend typical Mimasian classes. In 2020, Christoph got a renewed interest in digital design and achieved further knowledge in the use of digital tools to design iconography for Mimas. This led to several new royal orders and flags during 2020.

Royal Standard of His Royal Highness the Archduke.

Christoph was bestowed the title of Duke of Normtuas[1] by H.R.S.H Prince Nathaniel von Hanover-Lausenburg in late December 2017 as proof of friendship between the two head of states. The title is today an honorary title with no territory bound to it. The holder of the title is entitled to vote in the NorWakian parliament.

Sovereign of the Order of Saturn

In 2015 Christoph founded the Order of Saturn as the nation's highest dynastical knighthood. The highest officer of the order is the Sovereign and is held by the reigning monarch.