Schwanensee (Swan Lake), officially in Esperanto la Libera Respubliko de Cignolago (Free Republic of Schwanensee, formerly la Sendependa Libera Kosmopolitisma Respubliko de Cignolago), was a cosmopolitan meritocracy which declared its main territory on a virtual platform supposedly located in the Arctic Ocean along with several peripheral territories around the globe. As of 2019, the country had a population of 13 and claimed a total area of roughly 750 sqm., with its capital city in Novurbo (in English: New City).

Schwanensee was a cosmopolitan meritocracy: its citizens scattered in different parts of the world, meanwhile strictly classified into three social classes: Clerici (the Scholars), Guverans (the Administrators), and la Popolo (the People). These social classes were mainly based on their skills and their own choices on occupation, since every social class would be designated specified occupations or professions. Social class did not depend on one's origin, and every citizen had two opportunities after having acquired their Schwanian citizenship to alter the social class they belonged to. Some of the Schwanian territories, however, chose not to implement the social class system, such as the Autonomous Communist Region of Ruĝflago and the utopian settlements of Elysia.

The country adopted three universal languages as its official languages, namely Esperanto, Volapük, and Latin, while German, Chinese, and Japanese were some of the unofficial but recognized languages used more widely in daily life among citizens. Each official language was assigned to a specific social class as its sole language, and a language examination (no longer mandatory since October 2019) would be given before a new citizen could be assigned to any of the three social classes. In general, Esperanto served as the language of the people (also for foreign affairs, etc.), Volapük as the language of administration, and Latin as the language of academic research.

On 25 Dec. 2019, the 4th President of Schwanensee formally declared the dissolution of the country.

The history of Schwanensee began with a whimsical idea of its President, Richard C., who created the predecessor of Schwanensee, a cyberstate known as the Republic of Ceskonia, on 26 June 2009 while he was studying abroad in Osnarbrück, Germany. Richard had been well aware of the famous micronations around the globe, yet he was against such hard successionism, which he personally deemed problematic. The booming development of Internet-based micronations at the time, however, had facilitated his creation of a similar simulationist cyberstate, which would not claim any physical territories.

Hoping to achieve more interested participants, Richard chose to launch the project of the new cyberstate both on a Chinese blogging site similar to Blogspot (now already defunct) and on a German webhosting platform directly - both of which he spoke fluently. To his surprise, he noticed that the Chinese blogging site had already hosted a number of similar cyberstates (known as virtual states), with more than a hundred of which he, representing the Republic of Ceskonia, eventually built friendly diplomatic relations during the 2-year lifespan of Ceskonia.

During this time period, most background information on Ceskonia was based purely on fantasy rather than on reality - a typical trend for Chinese virtual states and German-speaking simulationist μnations. Based on the Internet Archive, Ceskonia had its capital city named Syldavia, and Richard also designed national symbols as well as postage stamps and banknotes for his cyberstate. Despite the fact that the latter were never materialized, Ceskonia founded the Online Numismatic Museum for Virtual States as a separate blog, which was inspired by the Finanzmuseum of Freistaat Fuchsen, a German-speaking μnation. Ceskonia also hosted the 2nd CyberOlympics and became a founding member of the Liberal Union, one of the three international organizations among virtual states at the time.

As Daniel C. joined Ceskonia as its Prime Minister in 2011, both of the citizens eventually agreed to expand its influence in the sense that Ceskonia should pay more attention to international communication outside of its original platforms in Chinese and German, partly due to a previous notification from the blogging site that its service would soon be suspended. The message had been catastrophic to many virtual states that utilized its service (blogging and message board, etc.), and attempts had been made in prior as to how Ceskonia could survive this: President Richard, who intended to stay connected with other virtual states, launched an Internet forum, whose service was supported by the same company of the blogging site, yet the environment there was quite hostile; Prime Minister Daniel, who favored an international solution, tried on the NationStates forum, which led him discovering the MicroWiki Forum, a platform both of them regarded friendly and feasible.

On 10 September 2011, Ceskonia officially renamed itself to Zwanenmeer (later to its German equivalent Schwanensee) with newly designed national symbols and joined MicroWiki, bidding farewell to its completely simulationist, Internet-based past. Nonetheless, Schwanensee in its early days was still inevitably partly related to personal fantasy (the legacy of which was the Schwanian Lomiän, the virtual platform on which the Schwanian capital was supposed to exist), though reality had also come to play a role in it - It also claimed physical territories in Germany and USA, etc., where its citizens actually lived at the time, and set German, Chinese, and Schwanian, a constructed language, as its three official languages. Furthermore, banknotes, stamps, and documents were also prepared and produced, with the hope that Schwanensee could more resemble a "real" micronation.

Before President Richard quit the project unexpectedly in 2013, he and Prime Minister Daniel had attempted to interact with micronations around the globe, not only on MicroWiki forum but also on Micras and MN-Marktplatz, participating in the Micras Expo 2012 and the 2012 MicroWiki Cup, etc. Such activity gradually disappeared as more citizens became inactive, resulting in the implementation of the Emergency Act in 2014 dissolving the Schwanian parliament and extending the presidential term indefinitely. The country became rather dormant until 2017, when President Daniel reformed the country by implementing uniform and standardizing policies over all of its territories around the globe, meanwhile adopting newly designed national symbols, etc. The social class system was implemented during this time period, followed by the change of official languages to Esperanto, Volapük, and Latin. Furthermore, national paraphernalia were manufactured with much higher quality and issued accordingly: all active citizens could receive their own identity cards and passports - on which they would be given a valid visa once they entered any Schwanian territories - for free as long as they applied for them, and salaries were distributed to ministers in kronen as banknotes and coins, which they could use within Schwanian territories for goods. In addition, professionally made Schwanian postage stamps were issued and used on domestic stationeries and international letters sent from Schwanensee to other micronations. The two special regions, Elysia and Ruĝflago, were also planned at this time in order to test the viability of other possible ideologies.

Such activity, however, was not accompanied by any increase in population. The population of Schwanensee had decreased to approximately 13 by the year of 2019, while only 3~5 of them remained active in daily affairs. An attempt to revive the country, namely the Cyrillization Movement, occurred in October 2019, during which the country underwent a pro-Soviet transformation: introducing the new coat of arms, adopting liberation theology as its guiding ideology, abolishing many of its meritocratic policies, meanwhile having its official languages written entirely in Cyrillic instead of the Latin alphabet (it was also planned at the time to promote Esperanto as the only official language of the country). The movement ultimately failed, with the remaining few active citizens reaching an accord in Lespedezo to formally dissolve the country on Christmas Day 2019.

The country was divided into four Provincoj or Provins (provinces: Lomiän, Rubainiän, Smaragainiän, Safirainiän) and two Regionoj or Ziläks (special regions: Elysia, Ruĝflago). The four provinces were further divided into two Urboj or Zifs (cities) and seven Kantonoj or Kantons (counties). Unlike most countries in the world, Schwanian citizens were not permitted to enter any other Schwanian territories apart from the one that they belong to, unless they had been issued an internal entry visa valid for their destination on their Schwanian passport prior to their journey.

From February to December 2012, Schwanensee also participated in the Micras world and claimed a rather small piece of land on the planet. Its territory on Micras resembled the virtual platform of Lomiän and claimed to have three cities, namely Neustadt (capital city of the Micras territory), Schwarzenfels, and Wessenfels.

Great Seal of the Bevünetaguveranef, the government body of Schwanensee

A cosmopolitan meritocracy, Schwanensee had previously been a parliamentary republic. The country had had a left–right multi-party system: following the 2013 parliamentary election, the biggest parties were the centre-right National Party and the centrist Green Party. Other political parties with seats in the Schwanian parliament (originally named Neuschwanenplatz, now known as Nulasvanadail), were the centre-left Bolshevik Party, etc., while other parties existed on the municipal level. According to the Constitution, parties promoting racism were strictly prohibited in the country.

Starting from late 2014, the parliament system had been temporarily abandoned due to the Emergency Act in action, which was proposed because of a lack of active citizens for a long time. Since then, the presidential term had been prolonged indefinitely, and the office of Prime Minister was also left unoccupied until a new candidate was appointed in late 2018 by the President. Under the Emergency Act, President also served as Minister for Foreign Affairs, whereas Prime Minister served as Minister for Internal Affairs. The Emergency Act was planned to be lifted during the Cyrillization Movement starting from October 2019, which resulted in the establishment of the Provisional Supreme Soviet (Cyrillic Esperanto: Провизора Супера Совето) in Lespedezo, yet the attempt ultimately failed due to the dissolution of the country.

Cosmopolitanist-Nationalist Coalition(2)
(1): Banned due to their Fascist ideology.
(2): Split into two different parties. 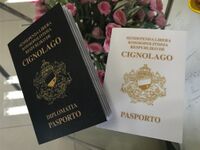 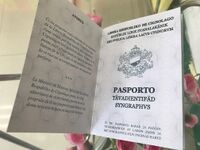 First page of a Schwanian passport

(1): Schwanensee recognized the citizenship of these defunct countries according to the Homeland Act, under which temporary visitors and newly accepted Schwanian citizens could report their citizenship either of these former countries or of their successors.