The Republic of Caelesta (Caelestan: Републкa Каелестеанэ), simply referred to as Caelesta, is a self-declared landlocked country with little to no recognition located in Eastern Europe. It shares a border with Romania in the Western and Central Provinces and a border with the Republic of Moldova in the Eastern Provinces. The total area of the country used to stand at 6.627 square kilometers (2.559 square miles), but after the May 2021 Territorial Shifts, the new territory of Caelesta stands at 2.958 square kilometers (1.142 square miles), which is significantly smaller, the whole territory combined being smaller than the old Province of Ravansa's territory. The population of the country currently stands at 23 people, the most recent census regarding population being taken on the 29 April 2022. The capital of the country used to be located in the District of Corindalesti, which later got merged with Astravenesti Munincipality in the Province of Corindalesti, the new capital of the country becoming the "DF"CZ. The Capital would then get it's name changed, on the 9 November 2021, to Pulchritudo.

The country was founded on the date of the 28 February 2021 by Connie, the current leader of the country. The official and most used currency is the Romanian Leu (RON). The two recognized languages in the country are the English, which is the most spoken language in the country, and the Caelestan language. Currently, the biggest ethnic group of the country is Romanians, standing at 30.43%.

The country is formed out of 3 provinces: Corindalesti Province, Vatra Province, and Ravansa Province, as well as the Capital Territory of Pulchritudo.

Citing from the "Important Information" page on the Caelestan Government Website: "Caelesta is a micronation founded by an ambitious transgender teenager from Botosani who wishes to build a community that promotes good values, such as equality between all people."

The country's original name pre-foundation was the Republic of Liberta, later being changed to the Republic of Caelesta to avoid conflicts with the existing Liberta micronation.

Celesta, before its founding on 28 February 2021, used to be called the Republic of Liberta, but it was changed to avoid conflicts with the already existing Liberta micronation. Even earlier than that, the Republic was only formed out of the territories currently in the region of the Province of Corindalesti, only later would the country annex the territories in the nowadays Vatra Province and Ravansa.

After its founding, Caelesta has already established, on the dates of the 7 and 8 March 2021, with the Pinangese Republic and the Snagovian Federation, mutual recognition treaties. It has also had a redesign in it's national flag and coat of arms. The first occurrence of Caelesta dropping their recognition on another nation happend on the 21 March 2021, when the Leader announced that Caelesta wouldn't recognize Carpatia anymore.

On the 30 March 2021, Caelesta has started officially forming it's own Government, made out of Provincial Presidents and the Leader.

On the 1 May 2021, Caelesta has shifted it's territory in hopes of it avoiding areas inhabited by people who arent aware of the country.

Shortly after the Summer of 2021 has started, Caelesta's Government fell under an inactivity that would severely harm the country. The Leader hasn't tried doing anything about it because of her feeling mentally overloaded and has left Caelesta alone for all of the Summer, September and a bit of October.

On the 27 October 2021, The Leader has signed an Order which hopes to restore the country from it's inactivity period. The Leader has also said that she will take it more slowly, as taking it too quickly was what caused her to get overloaded mentally and become inactive. The Order dissolves the entire Government, purges the political parties and the Provincial President spots, announces new Prime Minister elections, announces the temporary takedown of the Citizenship signup page, along more important stuff for the country going forward.

On the 29 October 2021, the Citizenship Applications have re-opened before the 2021 Caelestan Prime Minister Election, after being closed for the entire day of the 28 October 2021.

On the 30 October 2021, the Sign-up page for the 2021 Caelestan Prime Minister Election has been opened on the Governmental Site, and will be opened until the 3 November 2021, with a chance of extending the deadline beyond the 3 November.

On the 5 November 2021, the Leader, on behalf of the country, has officially signed the Wrythe Convention, claiming that "it is an important step for the development of the country.".

On the 9 November 2021, the Leader has signed her last Order before the 2021 Prime Minister Election. In that Order, she has announced the following name changes: the Capital's name ("DF"CZ -> Pulchritudo) and her middle name (Julie -> Sarah).

On the 13 November 2021, the Prime Minister election has officially concluded, making Mihnea Coman the new Prime Minister of the country with 3 votes out of 4, while the second candidate, Aleksy Gwaj, only got 1 vote. This could also be considered the end of the Summer Political Inactivity of Caelesta, as the Leader has said that she and Mr. Coman will do more with the country (e.g. Joining the Cupertino Alliance/GUM, establishing new Governmental Positions, drafting a constitution etc.)

On the 22 November 2021, Caelesta got it's first Constitution done and ready to be applied. This represents another big step in the right direction for the country.

Also on the 8 December 2021, the Republic of Caelesta has been formally accepted as an Observer State to the Cupertino Alliance.

On the 7 January 2022, a "Plan of Action for the Future" has been published to the citizens of Caelesta after a period of 17 days of being reviewed by the Government of Caelesta. This plan establishes goals that the Republic of Caelesta will try reach or achieve in 2022, the near future or the further-away future. This also marks the end of a de-facto small political break in Caelesta, that lasted throughout the Winter Holidays.

On the 11 January 2022, Caelesta has officially filled its very last Parliament Vacancy, the Province of Vatra getting its first Parliament Representative since the first Parliament Member has been admitted, after the 27th of October Order, over a month ago.

On the 2 February 2022, Caelesta was officially admitted as a Full Member for the Cupertino Alliance.

On the 12 February 2022, work on the National Pre-Octombrian Archive was temporarily declared as being over, with it having a total of 8 old orders/agreements form before the 27 October 2021. The Annexation of the new territory for the Capital has also been announced as being halted due to the inactivity of the Prime Minister, Mihnea Coman.

On the 21 February 2022, the Leader has announced that she was running out of patience regarding the inactivity of the Prime Minister, saying that she "would not let Caelesta slip into another Inactivity Crisis". She has also announced a few solutions to the situation of the Annexation Order, which included moving the Election Dates to an earlier date, organizing a Referendum, or just waiting until he comes back. The latter solution turned out to be the best, as the Prime Minister came back on the 26 February 2022, signing the Order. The new territory was implemented into Caelesta one day after Independence Day, on the 1 March 2022.

On the 28 February 2022, Caelesta celebrated its first Independence Day. The Leader has also given a 'speech' encouraging Caelestans, as well as everyone else, to help the Ukrainian Refugees that are fleeing Ukraine by donating, housing them, or through any other means, also affirming that "Caelestan solidarity with Ukraine will never die out".

On the 20 March 2022, after the Government of Caelesta signed an Order on the 19 March 2022, Provincial Capitals would end up returning to Caelesta. Pulchritudo would also end up getting its own symbols, which include a Flag, Coat of Arms, and a Logo.

On the 13 April 2022, the sign-up form for the Early 2022 Caelestan Prime Minister Election was launched by the Leader. Following this, two citizens would end up signing up to the Election on the 20th and 24th April 2022 respectively. The sign-up form is set to end on the 6 May 2022, the election itself taking place on the 7th and 8th May 2022.

Currently, the Government of Caelesta is formed out of the Leader, Connie Sarah, the Prime Minister of the country, Mihnea Coman, and the Parliament of Caelesta, which has 4 representatives.

The Executive and Judicial Powers in the country are held by both the Prime Minister and the Leader.

The Legislative Powers are held by the Parliament of Caelesta and the Leader.

Before the new constitution was adopted, the Government of Caelesta was formed out of just the 3 former Provincial Presidents and the Leader, all of them holding the Executive, Legislative and Judicial Powers. 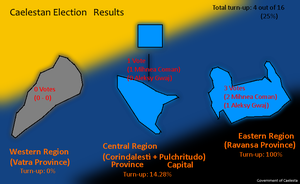 The Results of the 2021 Prime Minister Elections of Caelesta.

Currently, in Caelesta, there are 4 Political Parties. 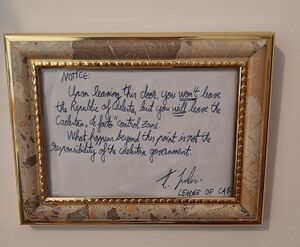 The Caelestan Leader, Connie, has published a page on the Government's website, on the date of the 10th of March 2021, stating that the claims of Caelesta are completely titular, and that the Government of Caelesta holds no de facto power over them, but that they may be considered part of the Nation, in hopes of not violating the points of the Wrythe Convention and the Edgbaston Convention. The Leader has also specified that she will try to make the country violate no points that the Wrythe and Edgbaston Conventions uphold in hopes of signing them in the future.

On the 1st of May 2021, Caelesta has shifted it's territories which the Leader hopes is enough for the country to be eligible to sign the Conventions mentioned above.

The Caelestan "DF"CZ was a small area within the Capital of Caelesta, the District of Corindalesti, where the Caelestan Authorities have almost full control, with the rest of the country being considered a "De Jure" Control Zone or "DJ"CZ. After the May 2021 Territorial Shifts, the "DF"CZ has become the new Capital of the Country.

On the 9th of November 2021, the name of the "DF"CZ would cease to exist, it being renamed to a more colloquial name, that name being Pulchritudo.

The country enjoys spectacular rural views in the Eastern and Western Regions, but also enjoys a lively urban life in the Central Region.

Despite the country being located and surrounded by other countries using the Eastern European Time zone, it uses its own timezone, called the Caelestan Standard Time, which is set, and will never change, at UTC+3:30.

The climate data from each of the provinces of Caelesta, as of the 22nd of March 2021.

The Republic of Caelesta has international relations with other nations, as well as being part of Micronational Organisations.

On the 19th of March 2021, Connie, the Leader of Caelesta, signed an agreement to introduce Caelesta's new visa policy. More information on the visa policy has been published on the government's website.

Caelesta also has put in place a special Visa Policy directed towards Micronations. Every Micronation has visa-free access to Caelesta, with a few exceptions, notably:

The Caelestan Language is a language that is official in the Republic of Caelesta. It is written in the Cyrillic script and it has it's base from the "Moldovan Cyrillic" language that already exists.

LGBTQ+ stances of the Republic of Caelesta

Caelesta, since its foundation, has always been a very LGBTQ+ friendly country, the Leader herself being transgender and also an avid LGBTQ+ rights activist within the micronational space.

The Population of The Republic of Caelesta is currently at 23 people, the population being distributed in the following settlements:

Currently, in Caelesta, the National Makeup is as goes:

Following a census held during the period of the 25th of December 2021 and the 31st of December 2021, with a turn-up of 5 citizens out of 20 at that time, we are able to see that a majority of Caelestans are Atheist and/or Not Affiliated with any religion.