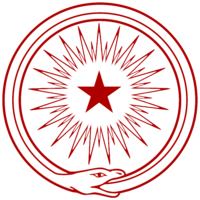 Ouroboros Socialism (Ouroborism) is a socialist ideology that advocates that "a revolution must not seek to create a new government, but to exist perpetually in a constant state of radical change and liberation of the People" (excerpt from "The Anglodeutsch Idea" by Konrad Schwarz). The theory is heavily influenced by Trotsky's theory of permanent revolution, more specifically by Abdullah Öcalan's system of democratic confederalism, as Ouroborism is an "undefined and flexible ideology that has limited rules to allow for maximum freedom" (Another excerpt from "The Anglodeutsch Idea"). Schwarz's Ideology has a few offshoots and variations, as to be expected from such a flexible ideology. These variations are:

Konrad Schwarz recognises each variation as legitimate as none clash with the original goal written out in "The Anglodeutsch Idea". At this time, there is only one Political Party that follows the Ideology of Ouroborism, the PRCA's Party of Ouroboros Socialism.