From MicroWiki, the free micronational encyclopædia
(Redirected from National Union of Cubia)
Jump to navigation Jump to search
Not to be confused with Cuba.

The Republic of Cubia, colloquially known as Cubia (/kjubiːər/), was a country that was created from UK Prime Minister's Boris Johnson's response to the 2019-20 coronavirus pandemic. It was meant as a way to prevent the virus from reaching its founder and only citizen. It was most likely described as a light secessionist micronation, with a rating of 3.33 on the Patel-McGrath scale.

The name of the Republic of Cubia was based on the fact that the founder, who is now Great Leader Llanfairpwllgwyngyll, copied and pasted the text on the Cube Wikipædia page recently before the founding of the republic. 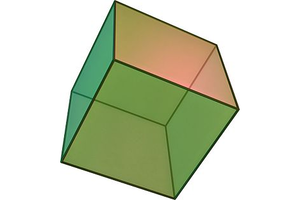 In the mid-2010s, Great Leader Llanfairpwllgwyngyll decided to create a citizenship form for a country called the Kingdom of the Nose. This citizenship form was never printed, but it was most likely replaced when GLL's computer was replaced, leaving no evidence but a simple memory in the mind of the leader. The country's existence has not been confirmed by external means.

In 2020, an independence referendum was held which said yes by an overwhelming majority of 100%. On 25 March, Cubia was declared an independent nation in its transitional period, which ended on 10 April 2020 with the formation of the first Cube Council. In June 2020, Cubia entered a state of partial inactivity, but this was ended in the middle of July 2020.

In September 2020, the Cubian National Party, was formed, and the Democratic Party of Cubia was formed in response. This led to the first proper two-party system in Cubian politics. On 6 November 2020, Cubia changed its name from the National Union of Cubia to the Republic of Cubia, with a new flag design. On 25 Janaury 2021, the Constitution was ratified by the Cube Council. After elections in March were annulled, the 2021 Cubian political crisis begun.

After the 2021 Cubian coup d'état, the country stagnated massively, leading to its silent dissolution on 2 June 2021.

Cubia had a unique political system in which the head of state, the Cubelord, takes a seat in the Parliament. Cubia had several political parties, 7 of which took representation in the dissolved unicameral legislature, the Cube Council. 1 party had representation on the National Transition Council. Cubia also had local legislatures which have no bearing on the national government in Cubia Gardens.

Cubia's judicial system relied on that of the UK. However, there was a supreme court and plans to create a de jure police force, called the Supreme Court of Cubia and the National Police of Cubia respectively.

Cubia was only recognised by the Timonoucite Empire. But, the table below shows who else had interactions with Cubia.

Cubia's main military was the Cubian National Militia founded in September 2020 and dissolved in May 2021. 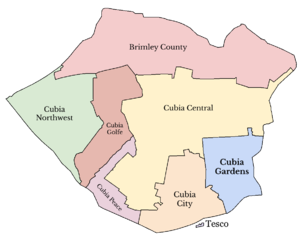 Cubia was split into 8 regions, whose main purpose is participating in the national and local legislatures.

Cubia's climate is very much the same as in the capital of the UK, London. Weather data is is taken from its nearest weather station at Greenwich, 18.66 km (12 mi) away.

Cubia's main currency wasthe Cubecoin. Along with the counting of money in the treasury, they were printed in mints specified by the Chancellor of the Exchequer. However, the O'Nella Ruble was formerly in use, until it was discontinued.

Cubian customs were the same as the country they declared independence from. The Cubian people speak 4 languages: English and French(in the main region), German(in the European colonies) and Thai(in the Asian colonies). However, many citizens used pseudonyms, especially fictional citizens.