The Monarchy of the Kingdom of Überstadt is the constitutional monarchy of the Kingdom of Überstadt. The title of the Monarch is King or Queen. King Adam I became Monarch on 14 November 2011. The Monarch is the head of both state and government, although bound by the will of Parliament in executive action. The Monarch is also the fount of honor and Commander-in-Chief. The Überstadti monarchy originated with the November Revolution of 2011, which dismantled the kritarchial government and recognized national founder Adam I as the sovereign.

The Monarch is constitutionally defined as head of state and government and the embodiment of the sovereignty and values of Überstadtis. Legally, the Monarch's sovereignty is vested in them by the people, from which it arises. The roles of the Monarch are thus based on both traditional and republican ideas, as reflected in the Monarch's extensive powers whose exercise is subjected to parliamentary review.

The Monarch is the ceremonial leader of the nation. They preside over public ceremonies and events such as holidays, festivals, concerts, and sporting events. Most national holidays are observed with some kind of royal ceremony, consisting at minimum of a speech. Furthermore, the Monarch is the fount of honor, awarding all state decorations. They are the sovereign of the three Überstadti orders of chivalry, the most senior of which, the Order of the Fir, is granted purely at the Monarch's pleasure with no qualifications required by legislation. The granting of honors against the public will, however, may be reversed by Parliament. 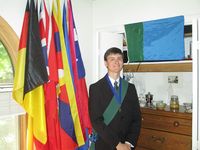 The Monarch, as head of state, is the chief representative of Überstadt abroad. They are responsible for maintaining relations with other states, approving treaties, appointing diplomats, and formulating foreign policy, although any of these actions may be altered by Parliament. The Monarch is thus the primary representative of Überstadt throughout the micronational community.

The Monarch is Commander-in-Chief of the Royal Armed Forces. They exercise direct command over the entirety of the military and are considered the most senior officer of all its branches, often seen at formal events wearing a naval uniform. Parliament may change orders or appoint an acting Commander-in-Chief, but has never intervened in direct royal control of military matters, which are seen as a natural complement of the Monarch's diplomatic role.

The Monarch is the default Moderator of Parliament. Parliament may elect a different Moderator, but for the entirety of the existence of the Parliament of Überstadt, the Monarch has directly presided over the legislature. The Moderator is responsible for enforcing order during legislative meetings, but like other citizens, may introduce, debate, and vote on legislation. Additionally, the Monarch has the same rights to propose and vote upon legislation as other citizens, and as the head of government typically proposes the most bills.

The monarchy of Überstadt began in early November 2011, when the earliest Überstadti reformers acclaimed Adam von Friedech as their king, an office which was formally codified in the Constitution of the Kingdom, signed by the first political supporters of the monarchial reform on November 14. The monarch was granted the above-described roles by the Constitution. As the reformed nation began to develop further, the king took on unofficial roles in ceremonial and cultural matters. Additionally, the inactivity of the first two sessions of Parliament led to the monarch personally exercising, within the bounds of the Constitution, some degree of legislative power. Most bills proposed in the Überstadti legislature were drafted by the monarch. During early 2013, as an increasing amount of social and political power began to be housed in the Royal Residency, the monarch was given first the power to define national territory, and the Residency was made the new capital after being claimed. Soon after, full legislative power able to be repealed by Parliament was granted. With the adoption of the October 2013 constitution, the monarchy lost its hereditary nature. On 30 September 2014, the Monarch's powers were once again modified, and the throne became the primary executive power as the premiership was abolished.

The Monarch nominates their own successor for confirmation by Parliament. This system was instituted to balance the continuity of traditional monarchy with the right of the people to choose their own head of state. Prince Aaron, the King's brother, is the present heir.

Überstadti Monarch lives in the Royal Residency in the core of the Barony of Rosewood. It is a one-level house typical of American suburbs, resting on a third-acre lot. The yards and common areas of the house are used for a variety of national gatherings. Notably, the coronation of King Adam occurred in the front yard of the Residency while it was still a part of the United States.

The style inherited by every monarch is as follows:

While no rules are prescribed for the use of ordinals, it is presumed that future monarchs will receive ordinals according to how many of their predecessors shared their regnal name. The use of the ordinal of "the First" (I), while not usually employed in most countries until a second monarch of the same name has ruled, is applied to Überstadti monarchs as a matter of personal preference.