Coronation of King Adam I 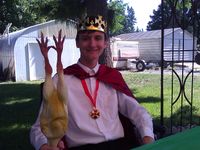 King Adam at the post-ceremony celebration

The coronation of King Adam I was the ceremony in which the monarch Adam I was crowned king of Überstadt. Adam ascended to the throne at the age of sixteen when the second Überstadti constitution was ratified in late 2011. The coronation was held more than nine months after his accession, on 1 September 2012. In the ceremony itself, Adam swore to uphold the laws of his nation.

Preparation for the ceremony began a month prior to its occurrence. King Adam himself oversaw the planning, aided by members of the royal family. During the month of August, the coronation's script was written and modified several times. The King Mother sewed the cloak that would be worn by her son as he took the throne. Most guests were sent electronic invitations, but some were invited personally by the king.

A key part of the preparation for the coronation was the selection and procurement of crown jewels. In the preliminary script, the regalia would include a sword, a ring, the Scepter with the Chicken, and the crown. In order to streamline the ceremony, however, it was decided that only the crown and scepter would be bestowed.

Because the Scepter with the Chicken had been in existence for many months, awaiting official use, the only crown jewel requiring procurement before the ceremony was the crown. A coronet of six crosses pattée was chosen in a Seattle shop for the purpose. It was adjusted to properly fit the king's head immediately following purchase, and was worn around the Royal Residence several times to accustom Adam to its feel. 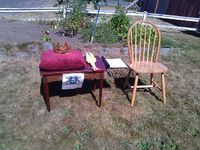 The altar and throne immediately before the coronation

The coronation occurred on the front lawn of the Royal Residency, midway of between the baronies of Überstadt. The event was filmed digitally by Adam's father. The ceremony was performed by Prime Minister Theron of Edmount, symbolizing the Überstadti monarch answers only to their people in official matters. Several people involved in the history and development of Überstadt were present.

The ceremony began with Adam exiting the Royal Residency and walking to the throne as Long Live Überstadt played. After he sat, the Prime Minister informed him of the people's willingness to serve him. Adam then swore to uphold Überstadt's laws and to ensure justice in the Kingdom. Theron presented him with the Scepter with the Chicken as he agreed to take upon the responsibilities represented by the scepter. Adam was then crowned, and a fanfare played as he stood and exited the yard, reentering the Residency as the music ended.

Following the coronation, desserts were served to the guests in the Royal Residency's backyard. During this celebration, Theron of Edmount was knighted by Adam for his service to the Kingdom.