The Kingsland Insurrection was a series of amateur attempts to toilet paper the royal palace of the King of the Kingdom of Northwood-Oregon. The conflict is considered to have ended inconclusively due to a lack of activity from the attackers and Northwood-Oregon.

The attacks were believed to have been conducted by anarchists, acting out of anger towards the state of the Northwood-Oregonian government, which was operating under absolute control of Sovereign Carson I despite promises of a constitution. Other theories as to the cause of the attack included inside involvement and retaliation from heir apparent Preston Snyder due to not being involved in his favorite card game. In the end, there were three attempts to toilet paper the royal palace, each time occurring late at night.

Since the foundation of the Kingdom of Northwood-Oregon, Carson I had promised the writing of a constitution, or Canon Governing Document, to slightly democratize the Kingdom. While not a high demand by many of the citizens of the Kingdom, the promise had been unfulfilled by 6 December 2020. While possible that the attack was motivated by anti-absolutist insurgents, the occurrence of a card game the day prior led to the existence of two ulterior motives. The brother of Carson I, Preston, had been out for the day and night visiting friends. The same day, a game of Five Crowns had been played, a favorite of both the family and Preston. It is unknown how Preston would have found out the card game was occurring, but as pitched by Heylea, a member of the allied forces, it would be possible that the attack was orchestrated by him as retaliation for him not being involved in the game. Another suspect would be Alex, Aunt of Carson I, who lost the game by a close margin to his father and may have orchestrated the attack in retaliation. 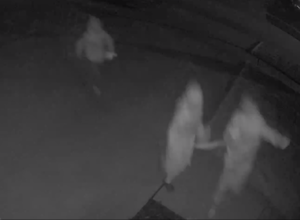 Security footage of three of the four Insurgents during the first attack.

At approximately 1:50 AM EST on 6 December 2020, three of the insurgents approached the palace from the west. Security footage and audio seem to identify the four figures as young juvenile males. After waiting for the fourth member to catch up with them for a brief moment, a passing vehicle seemed to have startled the group before they resumed their attack. While initially believed that this vehicle dropped them off, the reaction of the group towards the vehicle and the method of escape by the group seems to rule this out, the possibility that the driver of this vehicle was complacent in the act though is not entirely ruled out. The insurgents then proceeded to fail at placing toilet paper on a bush before moving towards the east face of the house and placing minimal amounts of toilet paper on five bushes. It is then believed that the group moved towards the street from the front of the house where, after knocking over a projector, which was projecting images of snowflakes on the palace, they threw one line of toilet paper on a tree before fleeing the scene from the direction they entered. It is worth note that thirty-three seconds into the attack, security footage became glitched and unviewable for a brief moment. While it is possible that this anomaly was unique, the thought that the insurgents had rudimentary anti-security technology was briefly entertained by allied forces.

Fifteen minutes later, at 2:05 AM EST, allied forces noticed the toilet paper swaying from the tree. While initially confused by the sight, with Heylea even suggesting that it was the projection that had been knocked over, they eventually came to the realization of the event before moving to investigate. Using a phone flashlight, the sight was investigated and described as a "really bad job." Allied forces then fixed the projector, and departed the scene, going home or going back inside the palace. Upon entering the palace, a dispatch was written informing the other members of the royal family of the event that had occurred. While this dispatch contained incorrect information about the scale of the attack, it became redundant when the information was able to be relaying in person in the morning. After the writing of the dispatch, Carson I relayed the information of the attack to a general forum of both members of the Kingdom of Northwood-Oregon government and other locals. Responsibility for the attack was falsely claimed by non-citizen local Gabriel, who claimed to be operating out of the "squad mansion." Following the legitimacy of this being challenged, the claim was rescinded.

The morning after the attack, the known information was relayed to the rest of the present members of the royal family by Carson I. Carson I's father and mother promptly investigated the attack to which both laughed at it before agreeing to review the security footage. Upon review, the direct involvement of Alex in the attack itself had been ruled out. The involvement of juvenile males, however, did not rule out the possible involvement of Preston, who was promptly retrieved from his friend's house. After a brief interrogation, the royal family was pleased with his answers and ruled him out as a suspect. Preston then took it into his own hands to contact and question his friends who fit the description of the suspects. No one had officially claimed responsibility for the attack. 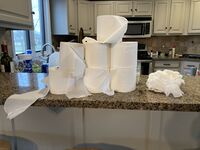 On 24 January 2021 at approximately 1 AM EST, four insurgents once again attacked the royal palace with toilet paper. That night, Preston had a friend, Gavin, spend the night, though this is believed to be unrelated to the attack. The attack was noticed by the mother of Carson I, Stephanie, who opened her bedroom window to ward off the attackers. This action woke up Carson I's father, Richard, and caused the insurgents to flee the scene. Richard and Stephanie both went to check on Preston and Gavin in the living room, neither of them had been woken up and were notified of the attack, clearing them of any potential involvement in the situation. All members of the family, the Gavin, would then go back to sleep, except for Carson I who hadn't been woken up during the ordeal. The morning after, the royal family recovered abandoned toilet paper used by the insurgents. Carson I would later be woken up and alerted of the attack by Stephanie and told that the insurgents had done "worse than the first time."

On the morning of 22 August 2021, the royal palace was once again toilet papered. This occurred after the birthday party of Preston, which had taken place preemptively the day before due to his true birthday, on 23 August, being on a weekday. The attack was noticed by local police at approximately 5 AM EST, whom contacted the royal family and offered to assist in cleaning the incident. Such help was not needed because, as with the prior incidents, the job was lackluster. By this point, the attacks became apparent to be targeted at Preston, the heir apparent to the throne, and seemingly conducted by his personal friends.