Taylor and Oats is a one-act play that revolves around a wizard who attempts to teach a lesson to a teenage girl named Taylor by turning her into a granola bar.

The one-act play was written by citizens of the Kingdom of Northwood-Oregon Emmalee Guy, Alisha Marshall, Caleb Scarberry, and Carson Snyder. Inspiration for the play came from Franz Kafka's The Metamorphosis, with the original plot having Taylor turned into a granola bar by inexplicable means.

Taylor
A depressed and unmotivated teenage girl who sits on the sidelines of her own life. Learns a valuable lesson or is ultimately scarred by the Magical Granola Wizard by the end of the play.

Magical Granola Wizard
An erratic and eccentric lesson-teaching wizard who clearly does not fully understand wizardry. Seems to genuinely want to help Taylor, but his lack of magic skills gets in the way.

God
A personification of God, slightly strange and enjoys a sandwich.

Eric
A friend of Taylor and Tonya, has underlying family issues at home. 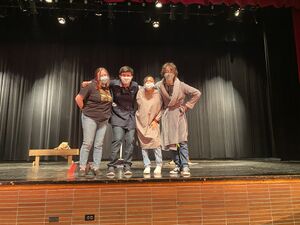 The original production was practiced and performed at Clay High School Auditorium in the Duchy of Clay alongside Rats! In the Cellar.

The play was originally planned to be performed by the writers, however, Emmalee Guy, who would play Taylor, and Caleb Scarberry, who would play God and Eric, were both unavailable the day of the performance. This led to Sav Large taking the role of Taylor and Grant Bruns taking the roles of God and Eric, both of whom were actors in Rats! In the Cellar which had just premiered prior. Due to the short notice of them assuming the roles, both had to physically carry scripts on-stage during the performance.