From MicroWiki, the free micronational encyclopædia
(Redirected from Istrian Dinar)
Jump to navigation Jump to search

The Istrian dinar was also used outside the Istria. It was used in the Bucharest Union as a reference currency and in Vanya after their currency was withdrawn from circulation due to strong inflation. The currency has not been into use since the dissolution of Istria in April 2022.

The Istrian annual numismatic program was a very important part of numismatic history. This was done so the historical events wer3 commemorated in a way. Philatelic emissions also happened when alliances with different countries are done. The numismatic program also presented the important details of different Istrian banknotes variants released in that year. The commemorative banknotes and coins were the most important part of the plan, the Prime Minister, doing its self, in collaboration with the Governor of the National Bank the models and the overall plan.

Numismatic Program: Her Majesty the Queen 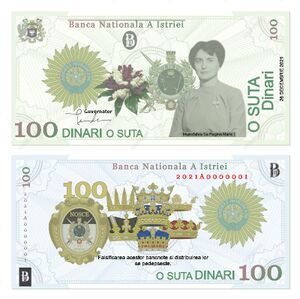 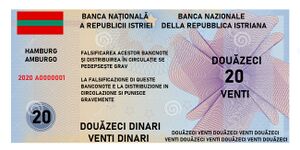 Commemorative coin not intended for circulation

Commemorative topic: "History of the Istrian Crown: 10 Øre Coin"

Commemorative coins not intended for circulation Denomination: 5 Dinars Commemorative topics Regions of the Republic of Istria:

The subject of commemoration: "5th anniversary of the Istrian dinar 2016-2021"

Ultra UNC coin set containing all the circulation coins + the 10 5 dinar coins from the "Regions of the Istrian Regions" series + the 2 Dinar coin "The 5th anniversary of the Istrian dinar" Circulation: 1000 (500 Chievo and 500 Hamburg) Issue price: 103 Dinars

Ultra PROOF coin set containing all the circulation coins + the 10 5 dinar coins from the "Regions of the Istrian Regions" series + the 2 Dinar coin "The 5th anniversary of the Istrian dinar" Circulation: 500 (250 Hamburg and 250 Chievo)