From MicroWiki, the free micronational encyclopædia
(Redirected from Freshland)
Jump to navigation Jump to search

The Kingdom of Freshland, abbreviated as K.O.F., KOF, K.F. or KF, or more commonly known as Freshland, is an Inactive self-proclaimed secessionist proto-state which has been recognised and referred to by the United Nations as a self-proclaimed secessionist micronation. Freshland's mainland is located in a semi-rural town near Glasgow in Scotland, United Kingdom. Freshland also maintains a small de-facto territorial land claim in a state-owned public server in the video game Minecraft, whitch is home to the de-facto capital city, royal residence and small local landmark of Scott Island, where the monarch resides. Freshland's form of government is an Absolute monarchy. The current king and monarch is HM&RH King Scottie I, who has ruled Freshland since its foundation. As of 2023, there are currently 4 people who have unofficially received Fresh citizenship. Freshland is currently not recognised by any member state of the United Nations.

Freshland was first formed in December 2016, and was ruled under various governments and had several name changes during its early history from 2016 to 2017. But from 2018 and onwards, Freshland truly began to function as a micronation. The monarchy would be proclaimed in April 2018, with the first foreign relations being signed in December 2018 with the Republic of Bonumland,[1] under founder and then-president Nick Rankov. Freshland would soon participate in the Youtube Micronational Community, which was a notable sector of various micronations that were mainly active on Youtube and Discord. Following a low-intensity civil war conflict which would begin in June 2019, and eventually come to an end in March 2020, Freshland withdrew from the sector in 2020 as a result of many different factors. Today, the KOF's government resides in de-facto exile in Mecklenburg-Vorpommern in Germany, and formerly Wittmund, Lower Saxony, Blomberg, North Rhine Westphalia, Nuremberg, Bravaria and Zagreb in Croatia. Freshland continues to remain semi-active online, as well the KOF's state owned public minecraft server. As of 2023, Freshland no longer holds any formal or active relations with other micronations or macronations.

The name "Freshland" originated from the username "FreshPotato76" used online by Scottie H. on a regular basis. Prior to the founding of Freshland, several names were proposed throughout 2017. While several of these proposed names were rejected and others were adopted briefly, the name "Freshland" was eventually chosen between December 2017 and February 2018. The name was originally derived from several of the previous name proposals which commonly included the word "Land" within them and were named after Scottie H. The "Fresh" part of the name "FreshPotato76" was chosen.

The name "FreshPotato76" itself was originally chosen by Scottie H. as his username and gamer tag for his Minecraft account in Early 2017. Although its origins remain unclear, it has been speculated that the name was chosen at random by Scottie H. with no meaning behind it. The English word and term "Fresh" itself has roots in German, Dutch and French, of which can be traced as far back to Middle, and previously Old English.

Freshland's Governmement is officially an absolute monarchy, and is ruled by the King if the monarch is male, and by the Queen is the monarch is female. The monarch of Freshland is the Head of state and takes most of the part in the Government. The title is currently held by the Sovereign, King Scottie I, who has been in power since 2018, after he ascended to the throne soon after independence.

Since 2017, Freshland has, and has had several different land claims though out the nation's history, these include:

Burnsland is part of the territory of Freshland. It has historically constituted the nation's Mainland, thus, commonly referred as "Mainland Freshland". Burnsland is located in the town of New Cumnock in a semi-rural area of Scotland. Burnsland's was originally established in 2018 by Scottie I as a small colony in an area later known as "New Paris". The territory evolved with time to include more territories and provinces in New Cumnock which would become Mainland Freshland on 10 December 2020. This occurred following an brief insurgency in New Paris, and later on the Burnsland territory on 15 August 2021 after Scottie I named the new territory "Burnsland" in honour of the world-famous 18th century Scottish poet Robert Burns, who is often referenced in New Cumnock for his poem "Sweet Afton" witch is mainly centered around the River Afton, all provinces and territories were merged together as they were seen as unnecessary by Scottie I. Despite still being the mainland of Freshland, as of 2023, Burnsland currently has no inhabitants.

Outside of the mainland, Freshland also holds a small de-facto territorial claim in a state owned public Minecraft server. The server is home to the de-facto capital city and the famous landmark of Scott Island. The server is also where the nation's history had originally begun back in 2016, and is where Freshland would eventually be founded in 2017. But despite this, it is now mainly de-facto claimed for ceremonial, symbolic and historical reasons. The server currently remains semi-active as of 2023 and has 2 players. The server is home to the famous landmark of The Big One, which many Freshlanders come to worship every year. 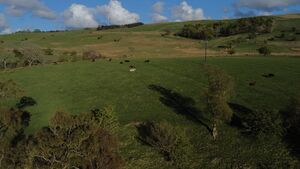 Burnsland's geography is home to an variety of local river streams and creeks. Many streams follow along the River Afton and flow though the Afton Creek, before dumping into the local town area of New Cumnock. Several ravines and hills can also be found in the surrounding areas, nearby large wooded forest. Elsewhere nearby, there is a plenty of green arable farmland fields commonly used for raising a variety of livestock animals, such as Cattle, Sheep and Pigs.

The rest of Freshland's geography is home to the Freshland Sea, which is a large and shallow body of sea water and is home to a variety of colourful coral, lily pads and kelp. Several streams, rivers and canals flow into the Freshland Sea from neighbouring lakes and ponds located in the surrounding areas. The Freshland Sea has undergone major engineering work since its construction began in 2017. The completion of the project is estimated to be sometime in 2023.

Freshland, similar to much of the Scottish Lowlands, experiences an oceanic climate (Köppen climate classification Cfb) similar to the surrounding areas.