Originally founded in late 2019, it has since grown considerably. It has taken part in many wars, most notably the Hougoumont Campaign. The nation's population was at its peak in April 2021 with 20 citizens. The reforms of June 2021 caused a lost of large amount of population, but it has since regrown and now has a population of 17.

The country is generally considered to be a modern liberal democracy with multiple parties, the largest one being the Democratic Republican Party. The country is considered somewhat progressive as its Constitution bans discrimination based on race or sexual orientation as well as banning capital punishment.

The nation is made up of several republics and territories, the largest by area of which is the Garavaglia Republic. The largest republic by population is Oakland. The nation is a federation, meaning that every Republic and territory has the same rights as the federal government. Governors have much power in local situations, while the President and the federal government manage foreign affairs.

The name came from the fact that the country is a union of republics that they are all located on the Lower Peninsula of Michigan. The name Michigan derives from a gallicized version of the original Ojibwe word ᒥᓯᑲᒥ (mishigami), meaning 'large water' or 'large lake'.

The nation was founded on 28 October 2019 as the Republic of Michigan by the three founding fathers Evan Callies, Alex Robinson and Xander pollock. Callies became president, Robinson became prime minister and pollock. became vice prime minister. The first land claims were the Oakland Republic and Wayne County territory The provisional government met in a art class at Power Middle School. The first flag was selected with the two stars in the middle and a red bar along the bottom and Evan Callies wrote the First Constitution. Evan Callies then changed the flag to 6 blue and green stars in the canton and 8 red and blue stripes but this flag was unpopular and so was quickly replaced by the one the nation has now. Land was then added in the form of the Samar Republic. The provisional government finalize the Constitution under the First Constitution, The territory was quickly added including the mountain territory. At this point the nation began to enter into discord micronationalism.The United Republics was mostly initially shunned and left out of international affairs. This would also begin their long-standing rivalry with the Reunited Ocean States (At the time United Ocean States). This is around when they began their Youtube channel. 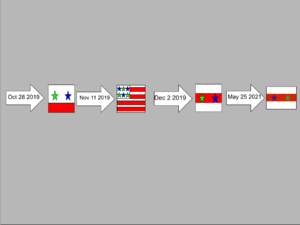 The 2020 United Republics presidential election took place on 9 January 2020. The president of the provisional government Evan Callies Won the election and according to the Constitution the person who came second would become Prime Minister but there were two people tied for second Alex Robinson and Samer Tacker. This meant the president had choose and he went with Robinson. Around this time Evan Callies friend Max Garataglia was informed about the nation and had the land he lived on become the newest Republic Garavaglia Republic. But it was around this time that reports surfaced that Alex Robinson had attempted to rig the 2020 United Republics presidential election. Evan Callies threatened to impeach the prime minister. Alex Robinson resigned and left the country's politics. Max Garataglia became the new prime minister. One of the president's other friends, Sanjin Who had been an army soldier for a long time. had the land he lived on claimed and called The San Noble Republic. This was the time that the country reached its population height of 20. it wasn't to last as Evan Callies friendship with the governor of the Samer Republic fell apart and the Republic left and rejoined the United States.The nation was Becoming more recognized in the discord Micronationalism and had become strong allies with the United Provinces of Greenia. The country set its sights on becoming a member state of the Micronational Assembly It was rejected several times

The United republics was a member of the Hougoumont Coalition during the The Johnny Land War It played the most important role. Evan Callies pretended to be an ally of Johnny Land and successfully deceived them into believing he would most effectively carry out the war and was given an admin powers in Johnny lands server. The nation then allowed the Coalition forces into the server which absolutely obliterated it. Following this Johnny land and its allies sued for peace. then the nation was allowed to join the Micronational Assembly as a member state. A few weeks later in May Evan Callies had become less interested in Discord micronations and focused on other things, this meant that some people believe the country had gone defunct even though it had not.

The United Republic then applied to join the Micronational Assembly and was allowed back in Many nations were shocked that the country was still around. The The Second Republic Constitution was implemented that added the Senate and changed the name of the Prime Minister to vice president. Evan Callies began to reform the country after an executive order 3 out of the 5 republics Where Ceded to the United States These were the Mountain territory, Garavaglia Republic and San Noble Republic. This was to consolidate the holding the nation had because these territories had been difficult to control. But one day later the president decided to allow back in the Garavaglia Republic With added lands. The nation began a strong alliance with The Federal States of Delphia over the joint dislike of the Reunited Ocean States At this time The Kapresh Civil War Had begun the nation was skeptical of supporting either side and announce neutrality. But after members from the country learned more about the Imperial Side Public opinion Was more pro-war. The nation issued an ultimatum that was rejected and they declared war on 12:00 Est july 7th. Around this time the president went on a trip to the land that would become the Heath Republic and saw that People that live there wanted to join, It's the same with the Grayling Territory And so both joined the country.

The URM government has two houses of Congress. They are the Delegation House, with 5 members, and the Senate,consisting of 3 members. The URM has 1 active Party, the Democratic Republican Party, that controls the president and Vice President, 2/5 of the Senate and 2/7 of the house. It is a center-left Party. All the rest of the members are independent. The URM is made up of 42% liberals 57% conservatives. 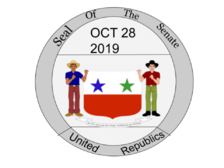 Seal of the United Republics Senate

The legislature is made up of the Congress of the United Republic, Which is itself made up of the Delegation House and the Senate. The delegation house is the lower house and it selected by SVT system combining multiple Seats Into a district and electing multiple members from that District. The current delegation house is made up of 7 Members. Each Republic receives one member at least, and another member for every three additional citizens. The Senate is elected in which every Republic and territory received one Senator.

The power of the executive branch is contain mostly with the President The President serves as Head of state and Commander-in-Chief. The president is also the one who presides over the cabinet. The Vice President is leader of the cabinet and their fore Head of government. The cabinet is made up of secretaries appointed by the president. Along with other important leaders including the Speaker of the Delegation House, the Senate President and the Central Court Chief justice.

In the United Republic political parties are mostly formed during election times to support one or two candidates. only one political party Is truly a major force in the government the Democratic Republican Party

The micronation has an army (United Republics Army), a navy (Republican Navy) and an Air force (United republics Air Force). The Army has 8 soldiers, the Navy 2 sailors and 3 ships, and the Air Force has just one plane.

The United Republics Foreign policy is about preserving and protecting democracy and preventing the spread of radical undemocratic ideologies. It is a member of the Micronational Assembly. It is allied with many Nations including the Federal States of Delphia and Kingdom of Nueva Esocia.