Ultamian Army of the Republic

In the first week of Ultamiya's existence, it really had no military as it was busy developing itself in other ways. However, the outbreak of the Stravasite-Ultamian War halted most development to concentrate on the defeat of Stravasalter. After the defeat of the famous "Stravasite toddler" at Fort Manhalia, President David spent the next week and a half developing new weapon technologies. One of the main weapons experimented with was a plastic egg (Easter being the day after the battle) with marbles or magnetic balls inside that would crack pen and release them. Since the eggs would crack after a few throws, they were not of much use. After the war ended, the military was not used much, aside from somewhat frequent trips to Fort Manhalia and later Fort Manhalia Military District. Since neither the Atlantis Civil War, the Pimpville War, or the Slinky War had any action, the Ultamian military bided time while waiting for these conflicts to end, which eventually, they all would. Finally, after over a year of inactivity, the military returned to the forefront with two major victories in the Hicks War at First and Second Field.

On 21 February 2012, the 2012 Air Force Act inaugurated the Aerial Forces of the Ultamian Republic with a full set of ranks and with LTG Mikaila as Marshal and David running the duties of Vice Marshal. Later, on 4 April, the 2012 Army Ranks and Management Act finished the ranks and insignia for the army, and also repealed the hundred-plane provision of the Air Force Act.

The latter half of the Ultamian Republic's existence witnessed the largest military buildup in the area's history, all under the guise of the UAR.

The Army was the main division of the UAR and was what the military as a whole was named after.

Ultamiya never had enough personnel to fill all the ranks, but it was planned to follow the rank system of the United States Army. As more active people joined the military, the rank slots would continue to be filled until the entire system was built.

As most micronational armies are small, David never intended for these ranks to be temporary and available for promotion until an adequate amount of people enlisted.

The officer ranks were completed in 2011, and the 2012 Army Ranks and Management Act provided enlisted ranks.

The UAR had no year-round uniform, however there was a certain style of dress that is sometimes worn during the winter months. This uniform included a jacket, long pants, and a type of hat; this could include a tricorner or western hat.

This section lists the personnel and weaponry that were employed by the UAR. The UAR ceased commissioning of weaponry on 15 March 2013 at the announcement of the country's dissolution.

This table lists the personnel that were enlisted in the UAR.

This table lists the various people that fought alongside the UAR in a conflict. 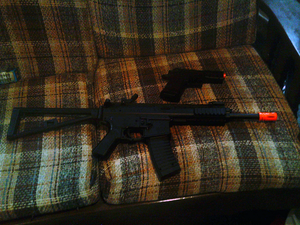 The Stinger P36 (top) and the Stinger R39 (bottom), the two Airsoft weapons owned by the Ultamian government. 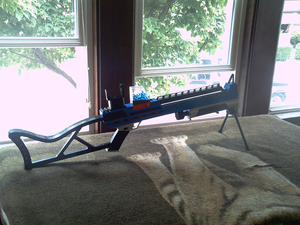 Aside from the various experimental weapons the Army tested, there were also a number of water-based "weapons" (mainly splash bombs or water guns) that were sometimes tested at John's Square Naval Base in the Capital District. As the Navy was only symbolic, and the Ultamian government owned no boats, this was an unconventional testing ground. However, there were a few unorthodox weapons that made their way into the Ultamian history book. 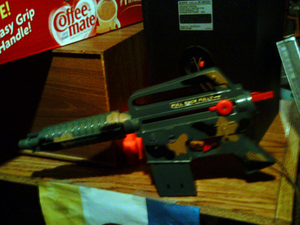 The Green Gun, used during the Battle of Fort Manhalia on 3 April 2010. The red cog unwinds when the trigger is held down.

Perhaps the most famous of Ultamiya's unconventional weapons was one that didn't cause any damage at all: A small, green spring-powered gun that made sounds, but fires nothing. It was this gun that won the Battle of Fort Manhalia, leading many micronationalists to criticize Ultamiya for fighting the battle.

Now, after about 5 seconds of research, I have come up with the real story: "Then, some random toddler walked into the playground and, for some strange reason, started playing. The Ultamian Army then opened fire on the toddler with state-of-the-art rocks, sticks, and other loose items. The toddler returned fire with mulch, more rocks, and even throwing Ultamiya's own sticks back at them. This continued for about 20 minute [sic], before the toddler's mommy told him that he had to go. Many casualties were sustained, including splinters, headaches, and boo-boos. The Army then went home because they had run out of sandwiches."

The President later explained the real battle on the MicroWiki Forum, and today continues to own this gun. 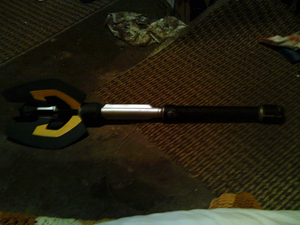 Maces were mainly used during the medieval era of Europe, and would lead many to think that they would be useless in micronational warfare. This is not the case, however, as a successful use of an Ultamian melee weapon turned the tide of the Pimpville War. By invading the Republic of Garden with only this mace and a shield, David successfully convinced Garden to surrender on 21 October 2010. The mace remained in service throughout Ultamiya's lifetime.

The Aerial Forces of the Ultamian Republic were established on February 21, 2012 with the 2012 Air Force Act. It was run by a Marshal, who oversaw military use of planes, and a Vice Marshal, who oversaw scientific research. The VM answered to the Marshal but was generally independent.

The Air Force was supposed to have a hundred planes in its ranks by 1 May 2012, but this was cancelled by the 2012 Army Ranks and Management Act in April.

The military remained active for most of its lifetime, though the only day-to-day worker was the President himself. Though warfare was never in popular opinion, he always believed that it was a thrilling process.

Micronational warfare may be immature at times - but when actual military conflict occurs, and mind you it can in many ways - sometimes the boredom of running a micronation can go away. Not that it's boring in the first place, but you get the idea. If I didn't think warfare was something to, you know, look out for, and just do, I would just stay in the Government House.