The Pimpville War was a cold war that was declared on October 20, 2010 by the Republic of Pimpville.

Pimpville was created by two classmates of Ultamian President David, Sheiniyo and Androva, during a U.S. History class. They promptly declared war and rallied others to join their cause. Their sole micronational ally came in the form of the Garden Republic (known as the 'Garden Nation' by contemporary records), which was not far from the Ultamian capital of Ultima. Previously, the two nations had planned an excursion into the neighboring regions, but those plans were cancelled when the Gardenians joined Pimpville.

That evening, David grabbed the Battlemaster Mace and a shield and pressed towards Garden, finding no one in the vicinity. He attempted again the next day and found the Vice President outside. He informed David that the President was at a convenience store and would be returning shortly. David waited and sprung out when the President came. They discussed about why Garden joined Pimpville and whether they would surrender. He replied by saying that they were dropping out of the war. David went home and typed up a Declaration of Surrender which was signed by both executives. In the Declaration, the Garden Nation had to become and remain neutral, and cut all militarial ties with Pimpville.

Over the next week and a half, Pimpville and Ultamiya's leaders met frequently in school and mostly just shouted things such as "It's on", but on Friday the 29th, they had a discussion about Pimpville's status on a trip to CCAC, a local college. Frarei said that they had both Airsoft guns and real weapons and would be invading Fort Manhalia Military District that Sunday, Halloween.

As the President predicted, that invasion never took place. 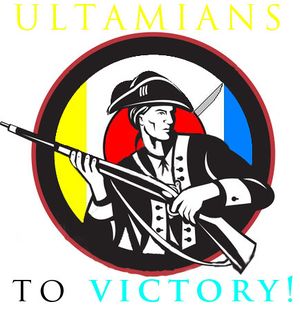 A war poster made for the Pimpville War.

Pimpville came under attack by the Holy Salanian Empire on November 1 after President Frarei insulted emperor Jordan I over Facebook. In addition, the Kingdom of Istoria, one of Ultamiya's best friends, also declared war on Pimpville the following day. In return, a sophomore rallied some of his classmates to declare war on Ultamiya, though only he and one other classmate believed that there was war to be had. David spoke with his adviser on what to do in this situation, and she informed him that the best path is the path of peace.

David presented a peace treaty on December 6 and was denied. However, when the two presidents were discussing a Valentine's Day event on February 14, Frarei saw the peace treaty and erased everything, writing his own name in its place. David signed about 30 minutes later.

Though faced by tough opposition, Pimpville continued to state that there was a just cause for the war. According to President Frarei, there were two purposes of the war, one of which was to show that Pimpville was the dominant micronation in the region. The only way to do that, he said, was by fighting. The other was to annex Fort Manhalia Military District.

Ultamian President David believed that the war was completely useless and the Republic withdrew recognition of the war on November 3.