The Fraternal War is a conflict between the Kingdom of Istoria and the dictatorial nation of KMITBN (Kick-Max-In-The-Butt Nation). Though not a civil war, by context, it was taking place within a part of a basement of an apartment building, where His Royal Sir's family lives, and may have been considered such to an extent. Though a major threat to Istorian security may have been posed, the KMITB movement never caught steam, and nothing much happened. 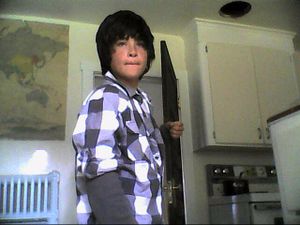 The war was declared by Quinn Kasbar, the self-declared militarial dictator of KMITB, on Istoria on October 18, 2010, because of a sibling rivalry with King Max I of Istoria, and rallied other micronations against Max I to join him. Though this call for support failed, the two nations were already fighting in small skirmishes with each other. KMITB's greatest achievement in the war was the occupation of New Diablo Military District, however it was not long before the two leaders met and declared a ceasefire and ended the war on the 22nd, even though KMITB Nation still currently exists, only that it doesn't provide a threat for the Republic of Kuhugstan, Max's current micronation. The only battle to be fought between Max & Quinn Kasbar after the Fraternal War was the Battle of Ben Burr.