The Commonwealth was proclaimed after a meeting between the Equality Movement, Urosh Dushanov and (briefly) Otar Kalev. Originally, the meeting was intended to be the beginning of a military coup, but instead of seizing power by force, a new idea was put forward, which included the formation of a new country in which disgruntled members of the Equality Movement could become government officials. It can also be noted that the rue of Otar Kalev, president of Cheslovia (from 1 November 2009 - 1 November 2010) has been less prosperous than originally thought, as most activity in Cheslovia had only occured in the Republics and far less laws have been created than originally hoped for.

On 5 February 2010, Cheslovia declared its independence from Transbaltia and claimed that "Cheslovia has a bigger agenda which will not include Transbaltia and its member states". Urosh Dushanov stepped down from office as Chief Executive and gave his office to Ud Mahazarian. Cheslovia was no longer an official language and the capital city was moved to Kaniv. 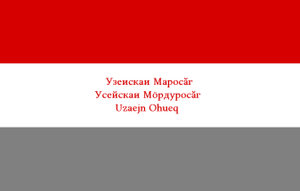 The nation is headed by a Chief Executive, who oversees the creation of all laws within Transbaltia, which can be created and proposed for a vote by any government official of any member state. The Executive oversees all laws withing the member states and reports to the Chief Executive who then decides if the laws conflict with any Transbaltian laws. Elections are held every two months.

Member states keep their own military, but are responsible or the defence of all member states, not just theirs. Likewise, each member state keeps their own currency, but the currency can be used in any member state, although the Quez is least popular due to it not being pegged to an actual currency, such as the Euro or British Pound, instead the Quez is worth its value in Quartz.

Member states of the Transbaltian Commonwealth may leave only if reasons provided indicate that the member state is not benefiting from the commonwealth.

The Seym (Russian: Сэйм, Malokaznian: Сейм, Arvasian: Лa Хд-омас, Uwrnov: Суомас) is the national assembly of Transbaltia, after Cheslovia left the commonwealth. Since Malokazinhereted is a capital state and an absoloute monarchy, no such assembly existed. With help from Cheslovia, and new assembly was adopted in Kaniv and called "The Seym". The word is derived from the Polish word "Sejm", which is the lower house of the Polish parliament.

There are four member states of Transbaltia, all member states except Arvas are founding members. Only Baltian nations may join, provided that they are held in high regard with each member state of the Transbaltian government. On 29 January 2010 the Republic of Arvas, once considered a hostile nation towards Cheslovia and its allies, left the Confederacy of Baltian States (a rebel organisation) and joined the Transbaltian Commonwealth, it also moved its territory closer to Transbaltia by annexing a large amount of Aigoria, a separatist rebel nation aligned with the Confederacy of Baltian States.

Transbaltia has no single military, instead, the military of each member state is responsible for the defence of the nation.