Known in the micronational community by his Kaznian name, Urosh Dushanov was the founder of the Amtin Federation (now known as the Cheslovian Federation as of 11 November 2008) on 11 March 2003 after it broke off from the now defunct micronation called "The Tribe".

Work in Cheslovia and the micronational community

Urosh Dushanov was the founder of the Amtin Federation, which is now known today as Cheslovia. During 1 November 2008, he coordinated the reform that would transform the Principality of Kaznia into the Cheslovian Federation. He also initiated various reforms in the past such as the "Great Reforms" and the "November Reforms" of 2007.

Urosh has done much to Cheslovia, approximately 98% of Cheslovia has been made from Urosh's own ideas. Nearly all of the reform projects that occured throughout Cheslovian history have been carried out by Urosh or directed by Urosh, he was the first to discuss the idea of a federation, but the idea was expanded upon by Boris Groznayev, Vasili Uladimov and Mikhail Gorbachev.

In the micronaitonal community, Urosh tries to engage in relations with other nations along with his Minister of Foreign Relations Vladimir Turkov. During the Somplenese-Molossian War, he successfully coordinated the defeat of Somple and its allies through the BCSA.

He was the first Cheslovian Republic governor to resign and hand over power early.

Urosh Dushanov believes in Socialism, and agrees mostly with Titoism, however "any form of socialism is acceptable" according to Urosh. He is very much anti Capitalist. Cheslovia is, strictly speaking, a socialist nation. However, private industries may be owned.

His extreme socialist beliefs were shown during the Confederate Empire of Versillies, CEV (an early incarnation of Cheslovia) in which the nation was far left communist, however today his views are much more liberal. The CEV was the harshest form of Cheslovia to date, at one point, he wanted to ban the emotion of love. Now however, he admits he was far more politically naive than he is now, and Cheslovia was still a young nation then with little experience of the out side micronational world (See Old known micronations for more details).

Urosh Dushanov is a patriotic supporter of the European Union and to the European continent itself. Urosh fiercely states that all of Russia should be classified as Europe, along with Greenland, Turkey, the Caucasus States and Kazakhstan, and some times even all central Asian nation (which were all part of the USSR).

Urosh founded the Kaznian Pagan Church (also known as "The Dangusov Church") and established a small shrine called the Dangus. Prior to being a Kaznian Pagan, he was a member of the Church of England but soon became an atheist.

Urosh has other projects outside micronationalism, such as his band Dark Horizon. During his spare time he either studies, reads the news or meets friends. He has a great interest in foreign cultures, particularly European and central Asian as well as an interest in geopolitics and languages. Much of the Baltiak languages were entirely created by Urosh, although after completing a language believing it has enough vocabulary, he adds its to his micronational project. When with his friends they try to talk in the language he/they have created, most of the time, when speaking a Baltiak language, they will speak in Cheslovian. 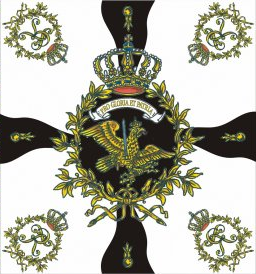 This flag was adopted during the time of Russland and was the royal flag of the Tsars family, the flag has never officially been dismissed by the Cheslovian government and continues to be the flag of Urosh's family to this day.

Urosh and his family have originated from three ares of Europe: Ireland, England and East Prussia (now part of the Russian Federation). His father cam from the city of Donegal, Ireland, his mother from Woodstock, England and his grandfather (and his relatives) came from Königsburg (Kaliningrad), his relative (but not grandfather) now live in Leipzig and Zangenberg, Germany.

Accoring to his grandfather (Iigon Dzyozhov), his German relatives (originally from East Prussia) were very wealthy up until the late 1800's when Urosh Dushanov's great great great grandfather gambled his fortune, and lost. After the second world war, The USSR (now Russian Federation) occupied East Prussia. Urosh Dushanov now associates him self not only with Germany, but also with Russia, because of this, he has also created a liking for other Slavic and Eastern European nations.